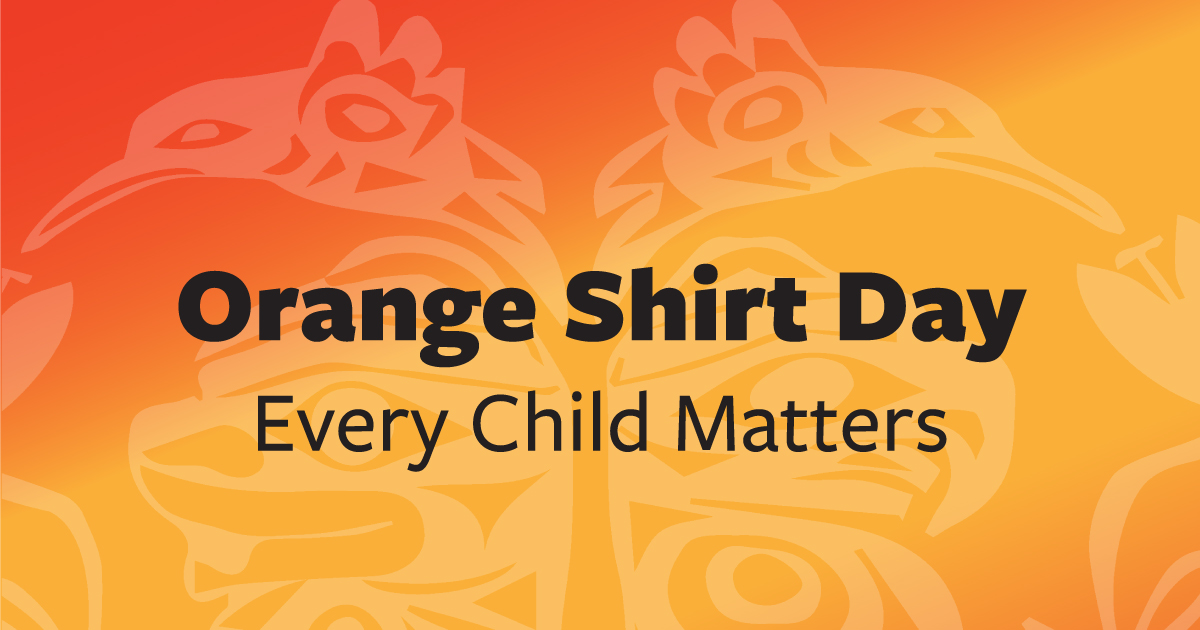 Thanks to everyone who joined us in person and online for the Xe Xe Smun' Eem-Victoria Orange Shirt Day: Every Child Matters Ceremony on Friday, September 30.

Orange Shirt Day, also the National Day for Truth and Reconciliation, acknowledges the harm that Canada’s residential school system has had on generations of Indigenous families and their communities. Every year on September 30, people are asked to wear orange as a sign of support.

The ceremony was live streamed on the City's Facebook page and on CHEK+.

Eddy Charlie and Kristin Spray share what led them to create Victoria Orange Shirt Day and what they hope their work in the community helps people understand about the effects of residential schools. (Video courtesy of the District of Saanich.) Watch the full version of the video.

The ceremony opened with a blessing and welcome by Tsartlip Nation Elder May Sam and a land acknowledgement by Songhees Nation member Brianna Bear.
The annual raising of the Victoria Orange Shirt Day flag was followed by 15 drum beats and a minute of silence to honour and remember those who did not survive residential schools. The flag was lowered to half-mast after the ceremony.
The event was emceed by Indigenous Perspectives Society Executive Director Rachelle Dallaire who is from the Montagnais people in lower Quebec and is an intergenerational survivor.
Event organizers Eddy Charlie and Kristin Spray spoke to the importance of raising awareness about residential schools to honour the more than 6,000 children who died and the sacrifices that were made by 150,000 residential school survivors and their families across Canada.

Mayor Lisa Helps was joined by other special guests, including the Honourable Laurel Collins, Member of Parliament for the NDP; the Honourable Murray Rankin, Minister of Indigenous Relations and Reconciliation and Attorney General and Minister Responsible for Housing; MLA Grace Lore and Capital Regional District Chair Colin Plant.

Rachelle Dallaire
Rachelle Dallaire is from the Montagnais people in lower Quebec. She brings more than 18 years of management and leadership experience to the community and her work as Indigenous Perspectives Society’s Executive Director. Rachelle has extensive front line service experience that informs her leadership from her early work with marginalized communities including women in the sex trade, corrections and homeless communities. As an intergenerational trauma survivor, she has worked extensively to educate on and support reconciliatory efforts.

Westwind Intertribal Drum
"Westwind Intertribal Drum is a family drum. Our family comes from a long lineage of pow wow people. Our late grandfather, Ernie Bertrum, was from the Pullalup and Yakama Nations. He brought the drum and teachings to this territory and to keep his culture alive he would sing with his children, our mothers and uncle. Many of of us began pow wow with our late Uncle Joe Henry as the Thunderbird Singers and Dancers. Later we formed Westwind Intertribal with lead singer, the late Ernie Alphonse. On September 30, we sing and dance to honour residential school survivors and those who did not make it home. We also honour all those who have, for generations, kept culture alive and vibrant."

Nicole Mandryk
Nicole Mandryk is Anishinaabe, Irish and Ukrainian and her traditional name is Niibinobinesiik. She is a visual artist who is dedicated to Anishinaabe art practices. Mandryk is inspired by Anishinaabe stories, art, land, language, and songs. She has been engaged in performative arts through Indigenous showcases and has been asked by community to compose and share songs. These songs have been sung by “The Wildflowers”, “ ANSWER” and the Lafayette String Quartet for the project“ B.K Weigel/Lafayette String Quartet Legacy Project”. Mandryk is also an emerging beader. (Photo Credit: Amanda Laliberte, 2020)

Adam Gauthier
"ʔaǰɛčxwʊt & Tansi (Hello/greetings). My name is Adam Gauthier. On my maternal side, I am Coast Salish from Tla’amin Nation. On my paternal side, I am Cree from Saulteau First Nation (Moberly Lake) in Treaty 8 and Métis from Lac Ste. Anne, Alberta. I am grateful to be a guest on lək̓ʷəŋən and W̱SÁNEĆ territories doing various types of community work since 2014."

Shauntelle Dick-Charleson
Shauntelle / Huupquestaah / TSAYŁE (She / Her) is a 20-year-old who got into poetry five years ago. She comes from Hesquiaht and Songhees. She plays soccer, basketball and enjoys poetry. Shauntelle went to CFWS with the Vic Slam Team and placed 8th in nationals. She has also had two poems featured in the Aboriginal Voices 2 book.

Tsartlip First Nation Elder Tom Sampson
Tsartlip First Nation Elder Tom Sampson is of Coast Salish and Nez Perce ancestry who has dedicated his life to fighting for Indigenous rights, through equality and inclusion. Elder Sampson is a trailblazer advocating for self-government and reconciliation before it was fashionable, advocating for Indigenous inherent rights through the revitalization of Indigenous languages, community health, sports, and the protection of natural resources.

Elder Sampson has taken a leadership role for most of his adult life being involved in Indigenous politics at the local, regional, and national levels, serving as Chief of Tsartlip for 24 years, chairperson of the South Island Tribal Council for 22 years, vice-chief of the BC Assembly of First Nations, chair of the Assembly’s Constitutional Working Group for Status Indians, chair of the Douglas Treaty Council, and chair for the Native Participation Committee for the 1994 XV Commonwealth Games and serving on the Board of Directors. Elder Sampson is one of twelve children. He is an Indian Day School survivor; half of his siblings went to residential schools and half went to the Tsartlip Indian Day School.

Hollie Charlie
Hollie Charlie is from the Cowichan Nation in Duncan, BC. She is a graduate, a social worker and a parent who believes her children should have access to culture and language. As the child of a residential school survivor, trauma has played a role in the family model that Hollie grew up in. Through sharing her story, Hollie is determined to educate her family and community about the impact of trauma to help end the cycle.

Residential school survivor Eddy Charlie and friend Kristin Spray are organizing the Xe xe Smun' eem-Victoria Orange Shirt Day: Every Child Matters Ceremony, which they developed in 2015 while attending the Indigenous Studies program at Camosun College. This is the sixth consecutive year that the City of Victoria is supporting the event to mark the City’s commitment to reconciliation.

Where to Buy Orange Shirts?