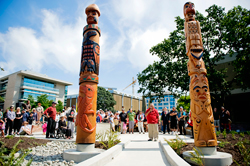 Victoria's Spirit Square is located within Centennial Square, a public gathering space located next to Victoria City Hall at the corner of Douglas Street and Pandora Avenue.

Victoria's Spirit Square features two Spirit Poles, known as the "Two Brothers" that serve as a gateway to this public space; a turn-key performance stage and infrastructure to host small and medium size performances and markets; a drinking water feature in the shape of a First Nations inspired ladle; and a sustainable garden of native species. The original elements of Centennial Square remain featuring a beautiful fountain, numerous benches and curved steps, all surrounded with trees and planters.

Victoria's Spirit Square is designed to make Centennial Square more inviting to the general public and increase opportunities for celebrations and concert events.

Spirit Plaza: the area in between that will be enhanced by new lighting, landscaping and outdoor furnishings.

Victoria' Spirit Square is an important step in the City's overall plan to rejuvenate the north end of downtown.

Butch Dick was nominated by Chief Robert Sam of the Songhees Nation and Chief Andy Thomas of the Esquimalt Nation, to design and carve two, 5.5-metre (18-foot) cedar Spirit Poles to serve as a gateway to the Square's native plant garden. Titled Two Brothers, one pole was designed and carved by Butch Dick with the assistance of his son Bradley, and the other was designed and carved by his son Clarence. Both poles are fashioned after traditional Coast Salish house posts.

This Spirit Pole features an eagle figure at the top, which Coast Salish ancestors believed to watch over them and provide guidance. The figure in the middle of the eagle represents the human side of the animal.

The wolf is a powerful, matriarchal animal within First Nations culture and has many powerful teachings within an extended family.

Sea otters were often part of traditional house poles and symbolize strength for those who are in need of spiritual guidance. The Grandmother Moon, encompassed by the otters, constantly watches over us and is a reminder to all to conduct themselves in a respectful manner that is fitting to their family and community.

The top figure of this Spirit Pole is Xe'els - the Transformer, who was the epicentre of cultural knowledge, travelling throughout the Lekwungen lands bestowing each community with cultural roles, responsibilities and economic opportunities. Xe'els was the knowledge, the teacher and the creator of teachings and understandings, and was able to transform into anything, man or woman. It is believed we still have much to learn from its mysterious ways.

Each west coast blanket had its own teaching and understanding behind it and was often attached to a significant event. Made of mountain goat wool and dog fur, blankets were given to individuals who had earned the right to wear them - disciplined and acknowledged as leaders by the communities. Xe'els wears a blanket to signify his accountability to the community.

The raven played an important role in how the world was shaped in the north western First Nations communities. Also known as a trickster, the raven wove his teaching throughout the lands and history. Ravens were highly intelligent beings and were mischievous, often finding their ways into other creatures' worlds.

The bottom figure is a mink, which shared the same attributes as the raven. Mink travelled throughout what is now known as Vancouver Island, teaching and showing what valuable resources each community was connected to and what their responsibilities were.

The project is made possible by the BC Spirit Square program, launched by the Ministry of Community Services (now Community and Rural Development) in 2006, to support the creation or improvement of town squares or open spaces in communities throughout British Columbia. The Province contributed the maximum amount of $500,000, which the City matched with additional funds to meet the vision of the design, for a total cost of $1.65 million.

BC Spirit Squares was part of BC150, an initiative that planned activities and events as part of British Columbia's 150th anniversary as a Crown Colony. For more information on the BC Spirit Square program, visit: http://www.spiritsquares.gov.bc.ca/