Poetry Picnic in the Park

Poetry Picnic in the Park 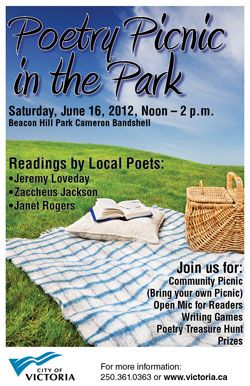 Thank you to everyone who joined City of Victoria Poet Laureate Janet Rogers and poets Jeremy Loveday and Zaccheus Jackson for a community "Poetry Picnic" on Saturday, June 16, 2012 from noon - 2 p.m. at the Cameron Bandshell in Beacon Hill Park. Music was performed by local musician Rik Leaf.

The community was invited to bring a picnic and a blanket for a free, family-friendly afternoon, complete with an open mic for poetry readings, writing games and a poetry treasure hunt and prizes. All ages were welcome.

Jeremy Loveday is an award-winning poet recognized for both his writing and performance. He was Victoria's 2010 Individual Poetry Slam Champion and he has represented Victoria at national poetry slam competitions three times. Jeremy has had the honour of performing at a wide range of events including Tedx Victoria, The Islands Folk Festival, the Canadian Festival of Spoken Word, and on the finals stage of the Vancouver International Poetry Festival when he was chosen as one of two festival highlights. In December 2011, Jeremy performed his poem “An Ode to Courage” as the official memorial tribute to Jack Layton at the 50th Anniversary BC NDP convention. Jeremy Loveday is also a skilled creative facilitator dedicated to spreading the power of the spoken word. He has taught classes to adults, teens, and youth at risk. Currently, he is the Director of Youth Outreach for Tongues of Fire and the Victoria Poetry Project. He is the driving force behind Victorious Voices which is Victoria's high school poetry slam championships. His poems have been published in journals, magazines, and online in countries around the world.

"Raised by wolves" since birth, Zaccheus Jackson came of age on the streets of Western Canada. Having battled through addiction, apathy and a nasty case of 'Virgo' - Zaccheus has twice been honoured to represent Vancouver and Western Canada at the Individual World Poetry Slam, as well as tying for third at the inaugural Canadian Individual Poetry Slam in 2011. Usually infusing rapid-fire delivery, gritty street tales, intricate rhyme patterns and social criticism, this "East Van ghetto poet" will leave you counting syllables in your sleep.

Rik Leaf is a professional recording artist, producer, TV host, author and the founder of the Canadian Performance Collective, Tribe of One, featuring French, English, First Nations and Métis musicians, dancers, painters and poets. Rik and his wife Zara moved to Victoria in 2011 after spending a year travelling around the world with their two kids. Rik published "Four Homeless Millionaires", a humorous travelogue that includes links to videos the family filmed in exotic locations around the world.