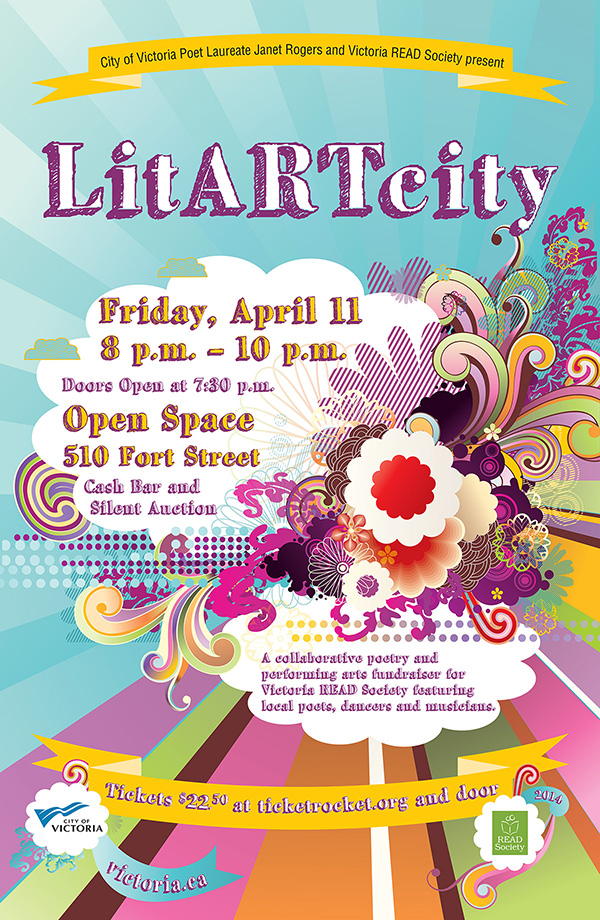 Thank you to everyone who attended LitARTcity, a collaborative poetry and performing arts event to celebrate National Poetry Month presented by the City of Victoria Poet Laureate Janet Rogers and the Victoria READ Society.

The event included a silent auction and cash bar. All proceeds supported the Victoria READ Society.

Janet Rogers is the City of Victoria’s Poet Laureate, in addition to being a local poet and radio host. She extends her literary talents into performance poetry, video poetry, spoken word poetry and recorded poetry with music. Janet has three published books to date with a fourth, Peace in Duress, published by Talon Books Ltd. that is due out this fall. She values all of the arts and enjoys creating opportunities for multiple genres and disciplines to come together. You can hear Janet hosting Native Waves Radio on CFUV 101.9fm Tuesdays at 2 p.m. and on CBC's All Points
West as the Tribal Clefs Music Columnist every other Tuesday at 4:20 p.m.

Jordan Abel is a Nisga'a writer from Vancouver. His chapter books have been published by JackPine Press and Above/Ground Press, and his work has appeared in numerous magazines and journals across Canada, including Prairie Fire, CV2, and Canadian Literature. Abel's first book, The Place of Scraps, was published recently by Talonbooks and has just made the BC Book Prize's shortlist.

Morgan Purvis, a student at Camosun College, was announced in January as the new City of Victoria Youth Council Poet Laureate. Morgan is an active volunteer with the Victoria Poetry Project and recently represented Victoria at the Canadian Festival of Spoken Word in Montreal. As Victoria’s Youth Laureate, she will serve as an ambassador for youth, performing at City Council and City of Victoria Youth Council meetings, and completing a project of her choice to engage her peers through poetry. Jeremy Loveday, a prominent Victoria based performance poet will be Morgan Purvis' mentor for the one-year term.

Lori Hamar began dance training in Edmonton, Alberta and continued with professional training at LADDMI in Montreal, Dancers Studio West in Calgary, MainDance in Vancouver and various summer programs in the United States. She quickly discovered her drive to create as well as perform and has honed this craft by co-founding three different companies to date; Motivity Modern Dance in Fort McMurray, Suddenly Dance Theatre and TriPOD dance collective in Victoria. Lori began teaching preschool children improvisational dance 14 years ago and has served as Acting Artistic Director for Holly Bright with the Crimson Coast Dance Society. Lori currently works as an independent dance artist while continuing the facilitation of children’s improvisation classes. She is currently creating a work that features the musical ensemble Continuum Consort performing a work by composer Linda Bouchard. 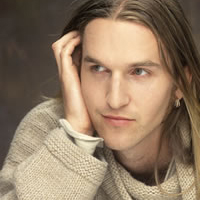 David Ferguson is a writer, painter, and producer of dance and film. As a Founding Artistic Co-Director of Suddenly Dance Theatre (1992-present) in Victoria. He has been a producer/curator of numerous collaborative, multi-media projects and dance productions, including the annual Romp! Festival. In summer 2012, David  premiered Rush of Water/Rush of Air, an outdoor four-projector dance-film installation in Centennial Square. Last year, he premiered a new dance-play KIKI starring Jung ah Chung.

Uminari Taiko is Vancouver Island's first taiko drumming ensemble. Its mission is to share and promote the art of Japanese taiko drumming through teaching and performance. Since its founding in January 2002, Uminari Taiko has performed in numerous schools, and public and private events and functions both in Victoria and around Vancouver Island, and has taught many workshops and classes. Uminari is a Japanese word that can be translated as “roaring sea” – the sound of the crashing waves and the silence in between. It is a name that captures equally the essence of taiko and of our windy, wave-swept island. Uminari Taiko is a non-profit, community-focused organization based in Victoria, British Columbia.

The intensity and passion of singer/songwriter Karen Lee White’s songs speak of a lifelong dedication to celebrating her roots and developing her art. Born in Grimsby, a small town near Lake Ontario, and now based in Victoria, British Columbia, Karen is a proud descendant of the Tuscarora, Northern Salish and Celtic People and has been adopted by the Daklaweidi Wolf Clan of the Interior Tlingit Tagish People. She has written and performed her own songs since the age of 13 and played at many major Canadian music festivals and events, sharing stages with the likes of Pied Pumpkin’s Joe Mock and Rick Scott, African guitarist and singer Alpha Yaya Diallo, singer/songwriter Garnet Rogers and Dobro player Doug Cox. Karen’s music is influenced stylistically by North American Roots Music: traditional country, blues, and folk in particular.

About the Victoria READ Society

Proceeds from the LitARTcity fundraiser will support the Society’s after school free tutorial programming for students in K-12. Using recognized assessments, READ’s qualified teachers develop individualized learning programs tailored to a child’s unique learning style. Classes use a wide range of educational resources and techniques to inspire children and youth to develop and expand their reading, writing, mathematics and study skills.

Since 1980 READ has offered Tuition Assistance for children and youth from low-income households. This funding comes from fundraising events and grant applications. Tuition Assistance provides students with pre- and post- assessments and up to 10 months of remedial classes. Classes are either once or twice per week.

Established in Canada in April 1999 by the League of Canadian Poets, National Poetry Month brings together schools, publishers, booksellers, literary organizations, libraries, and poets across the country to celebrate poetry and its vital place in Canada’s culture. Communities and businesses participate through readings, festivals, book displays, and other events.