Pop-up Poetry was a series of fun outdoor poetry readings for all ages that celebrates National Poetry Month in April 2013. 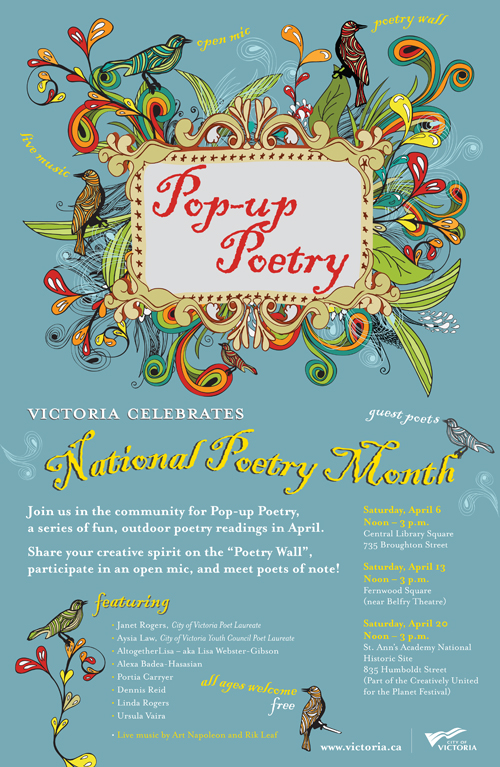 A Mohawk writer from the Six Nations band in southern Ontario, Janet Rogers was born in Vancouver, British Columbia and has resided in Victoria since 1994. A published and award-winning poet, she has worked and studied in the genres of poetry, short fiction, spoken word performance poetry, video poetry and recorded poems with music and scriptwriting. Janet Rogers hosts Native Waves Radio on CFUV 101.9fm and Tribal Clefs every Tuesday on CBC Radio One. Her video poem What Did You Do Boy, created in support of a spoken word track from her CD Firewater, earned nominations at the Canadian Aboriginal Music Awards 2009 and the Native American Music Awards 2010. (Saturdays, April 6, 13 and 20)

At 22, Aysia Law was named Victoria's first Youth Poet Laureate by the City of Victoria Youth Council in January 2013. During her one-year term, Aysia serves as an ambassador for youth in Victoria, performing poetry at City Council and Youth Council meetings, and has the opportunity to complete a project of her choice to engage youth through poetry. She moved here from Vancouver to finish her creative writing degree at the University of Victoria, and has since lost her metaphorical heart to this city. When not holding long and heated philosophical arguments with herself out loud, she enjoys serenading her showerhead off-key, confounding gender boundaries, and pulling strange faces at people for no apparent reason. Aysia grew up on the Lower Mainland and attended her first poetry slam at the age of 19. Aysia is pleased to be an advocate for poetry and youth in 2013 in her role as Youth Poet Laureate. (Saturdays, April 6 and 20)

Alexa Badea-Hasasian is the insomniac love-child of stage and poetry. Last summer, she wrote and co-directed a play for Victoria's 150th Anniversary called Letters From Fort Victoria. Alexa is also a student at the University of Victoria, finishing her undergrad in Theatre/Writing (a now extinct degree), and is thrilled to be included in Pop-Up Poetry. (Saturday, April 6, Central Library)

Ursula Vaira was born in Germany and grew up in northern British Columbia in a tiny place called Little Prairie, later renamed Chetwynd, 200 miles north of Prince George. After studying Education at the University of British Columbia, Vaira taught school on the north coast and in the Arctic, before moving to Vancouver Island in the early 1980s. She studied creative writing at Malaspina University-College, worked at Oolichan Books for 10 years, and founded her own publishing house, Leaf Press, in 2001. (Saturday, April 6, Central Library Square)

A past President of the League of Canadian Poets, Dennis Reid has published 10 books: five of poetry, three on fly fishing, one novel, and one non-fiction. Dennis has deep interests in a number of areas, including cutting-edge brain science, as well as artistic creativity, and has developed 70 different approaches to help artists do their best work. His next book of poems,You Shall Have No Other, is being made into web-based movies as its first incarnation. He has just finished a book of glosas and also has a historical novel, Bamfield, in the mail. (Saturday, April 13, Fernwood Square) 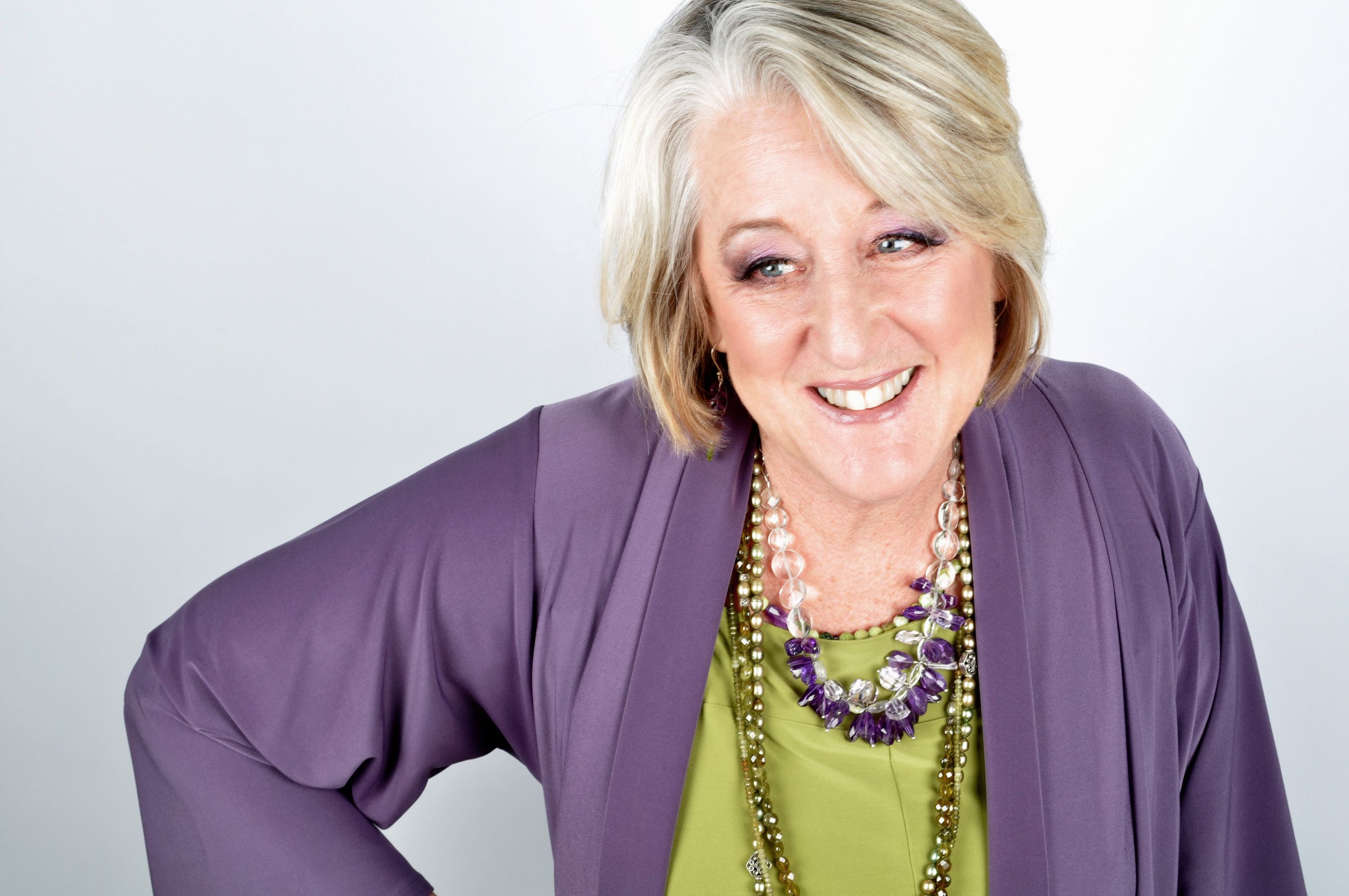 This is the buzz. It could be bees knees, bee disease or the birds and the bees. Former City of Victoria Poet Laureate and Canadian People's Poet, Linda Rogers, sister of Janet, has truth tourettes, a self-entertaining form of pre-dementia. Not for the easily dismayed. Rogers will speak of many things in the languages of poetry, fiction, journalism and song. You never know. Sometimes she is supported by the uxorious mandolinist Rick van Krugel. (Saturday, April 13, Fernwood Square) 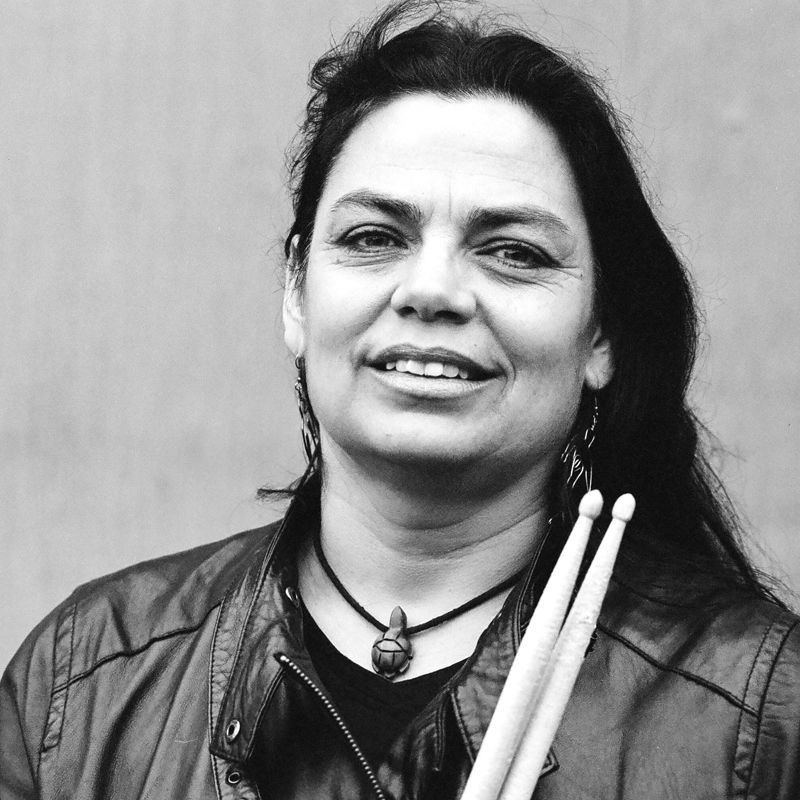 Lisa Webster-Gibson lived in Vancouver for 21 years as an Environmental Specialist, before moving to Gabriola Island seven years ago. There, she found her creative side as a spoken word artist, a visual artist and drummer for Gabriola based 'beachbilly' band. As a spoken word artist, Lisa is a wonderful mix of Mohawk/Deleware and Scottish Canada (fierce and frugal). Her identity allows her spoken word performances to delve into a range of topics from her native identity to life on a Gulf Island. Lisa employs a range of emotions and techniques to provide a bit of something to everyone. Her debut show at the 2010 National Campus and Community Radio Conference was a resounding success and left listeners wanting more. (Saturday, April 20, St. Ann's Academy National Historic Site)

Portia Carryer is a native Californian who followed her heart to Victoria in order to pursue an MFA in poetry. She and her cat are both Geminis. Her work tends toward the sexual and the feminine, and explores the ways in which we construct ourselves. Her poems have appeared in a number of literary journals in America. (Saturday, April 20, St. Ann's Academy National Historic Site) )

Established in Canada in April 1999 by the League of Canadian Poets, National Poetry Month brings together schools, publishers, booksellers, literary organizations, libraries, and poets across the country to celebrate poetry and its vital place in Canada's culture. Communities and businesses participate through readings, festivals, book displays, and other events.