A downtown alley has become a place for artistic and creative expression for artists.

In June 2014, a new outdoor art gallery was established in Commercial Alley to add vitality to this historic area and corridor used by local businesses and pedestrians. Located between the 500 Block of Yates and Bastion Square, the outdoor gallery allows for four, 1.2-metre x 2.4-metre panels, showcasing a temporary art installation annually.

The City of Victoria invites local artists to re-imagine the alley as a site for artistic and creative expression through an annual open call and jury process. Thank you to all who applied! Stay tuned for the next Call to Artists for the 10th installation. 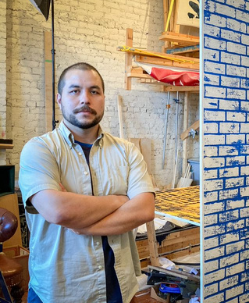 Artist Evan Locke’s project "Proximate Approximate" is a series of 1:1 stamp-like impressions mirroring the alley wall immediately opposite each of the four panel locations. The work portrays the fictitious result of the walls of the alley coming together and touching, leaving the depicted impressions. This site-specific reflection of the built environment places viewers within the space of the implied action, inviting the public to contemplate their own tangible relations to the place itself.

Evan Locke is a Victoria BC based artist maintaining a studio practice and concurrently working as a designer in the architectural industry. In 2017 he received his Master of Fine Arts in Visual Arts from the University of Victoria. Locke’s practice is painting-centric and focused on the depiction of process and material causality. 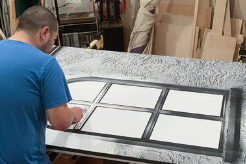 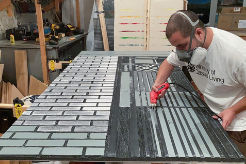 This original series, "What If" by Emily Thiessen, was selected as the eighth Commercial Alley installation. The project was developed in the early months of the global COVID-19 pandemic.

“I painted it on my deck at the beginning of the pandemic. The world felt so uncertain - full of fear, but also full of big dreams and ambitious mutual aid projects." Emily asked herself a series of “what if” questions such as, “what if after this is all over, things could be better than before?” She drew inspiration from the City’s Get Growing Victoria! program, which saw hundreds of seedlings distributed to non-profits and families in need to assist with growing their own food. "I thought, what if every spring camas and other food plant seedlings could grow all over city parks?"

"A year later, the skies are still burning red with wildfire smoke. I think this mural series is about knowing the future might be catastrophic and planting seeds anyway."

Fern Long is a Victoria-based contemporary artist. Using everyday materials like wood and cardboard, Long builds structures that are both sculptural and painterly to ask questions about home and how we create spaces that reflect both our collective experiences and personal narratives.

The works of art in the Commercial Alley Gallery are an expansion of Long's ongoing series called "Return Address." Each panel is cut in the shape of a house to explore the idea of 'home,' and cut slightly differently to evoke a sense of imperfection and individuality.  The shape is simple and universally recognized, yet a phenomenon that we each experience uniquely.  Long asks, "what does it mean to have a home? It can be a prison or a refuge, a place of belonging and love or no more than a suitcase.  It can exist only in our minds or be shared with many.  It is simultaneously a physical space as well as an emotional landscape inextricably bound with memory. It means something different to each of us."

Long includes elements of collage, text, domestic objects, floor plans and dense surfaces to reference the complicated and multifaceted relationships associated with the idea of 'home.' Layers of paint and imagery become like the residue of lives lived inside these architectural spaces.  Each panel is unique in design, but shares a similar colour palette and form to lend a sense of connection, creating a neighbourhood in the alley.

Long is a member of the BOXCARSIX artist collective and a graduate from the Vancouver Island School of Art.

Austin Clay Willis' original artwork utilizes bright colours, bold lines, and shapes to create fun, yet intense energy. The four panels work together as one installation, taking into account the red brick wall by pairing it with bright yellows, pinks, and other colours, as well as incorporating similar reds within the works themselves.The paintings juxtapose intense, convoluted patches of line and pattern with solid blocks of colour, allowing for the image to play with space and composition in interesting and dynamic ways.

Originally from Piedmont, California, Willis moved here to attend the University of Victoria’s Visual Arts Program in 2015. He tends to focus on bright colors and bold lines in pursuit of energetic positivity, love, and happiness. Currently Willis is working in a more abstract fashion, using shape, space, colour and line in order to play with spatial illusions and the pictorial shifts between foreground and background.

Visit Austin's website, austinclaywillis.com, for progress pictures and more information about his artwork.

A conceptual artist, Vancouver-born Choufour currently resides in Victoria, BC. He holds a Bachelor of Fine Arts from Emily Carr University (2015), has co-directed multiple short-term gallery spaces such as TAG Contemporary (the Emily Carr student gallery) and has exhibited at various galleries in Vancouver. Recently, Choufour oversaw the installation of his first permanent public artwork titled Hide and Seek, a large-scale, steel-plated sculpture in Delta, BC.

The gallery's fourth installation was created by Daniel Ellingsen. Coastal Reports stylistically reflected west coast culture through image and text. His thought-provoking artwork featured cut-outs, gold leaf, and texture to highlight his observations of west coast socio-cultural issues and topics, combining references from film and pop culture media. The artwork was exhibited from August 2016 to August 2017.

Born in the United Kingdom and raised in Tasmania and coastal British Columbia, Ellingsen’s work treads the line between playful and irreverent, profound and topical, making his commentaries relevant and full of wit – inviting interpretation. His work has been exhibited in Canada, the United States and abroad. 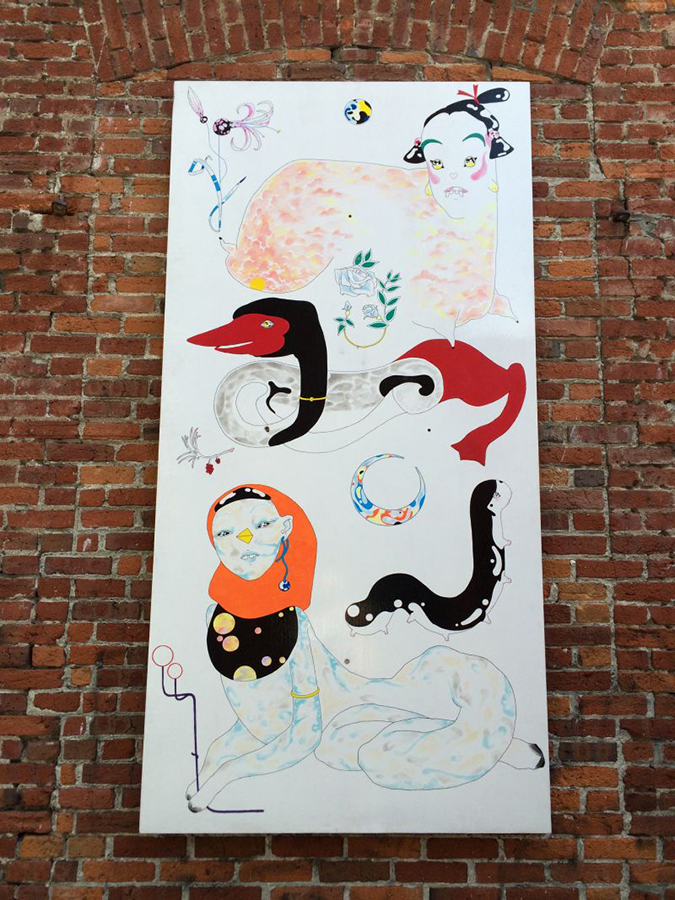 Liz P. Dempsey’s four-panel artwork featured hybrid, human-animal creatures that were both mystical and regal. The dynamic artwork captured the charged and raw energy of Vancouver Island, offering a rich array of symbols and visual imagery for the viewer to ponder.

Dempsey was drawn to Victoria by the magic of the Pacific North West Coast, and has been gaining artistic recognition around the city. Her work has been featured in many group and individual exhibits, she has been nominated for a Monday Magazine award, created custom pieces for businesses, including the "anime wall" in Metropol Industries Chinatown studio, and is the cover artist in Vancouver’s Mania Magazine summer issue. 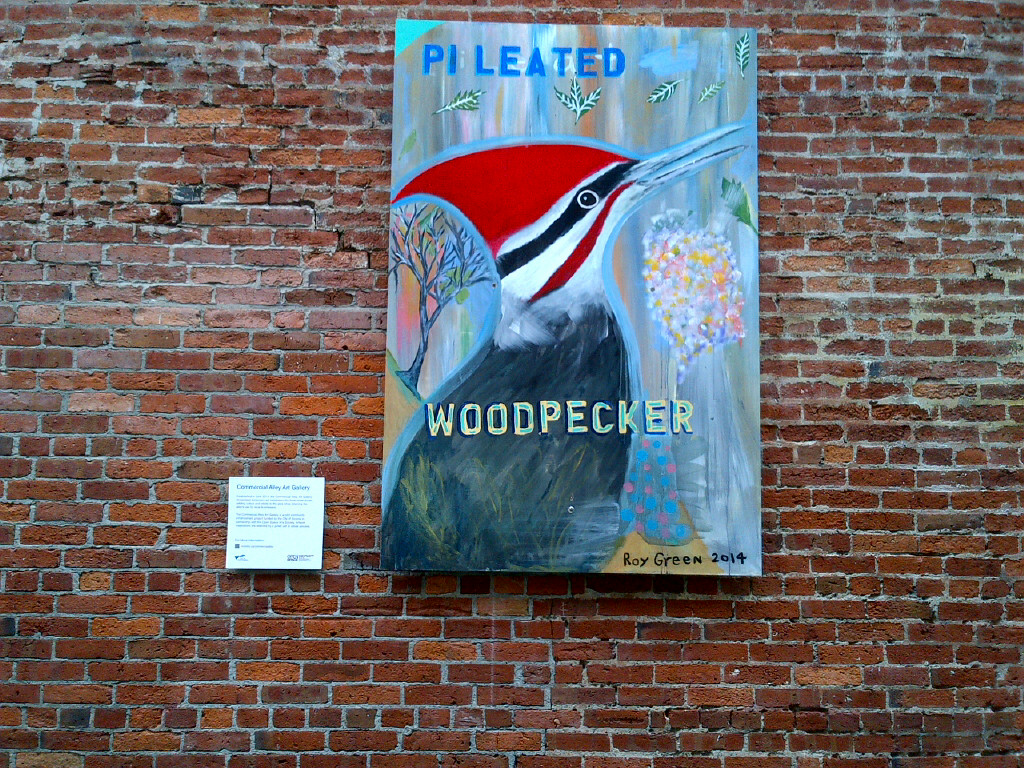 The second installation showcased Roy Green's commissioned artwork, featuring four birds both iconic and indigenous to Vancouver Island; the Great blue heron, the Red-winged blackbird, the Pileated woodpecker, and the Rufous hummingbird. The artwork was unveiled August 2014, timed with the Integrate Arts Festival. Roy Green is a Victoria-based painter, poet and performance artist. He was born in Lethbridge, Alberta and graduated from the Emily Carr College of Art in 1984. 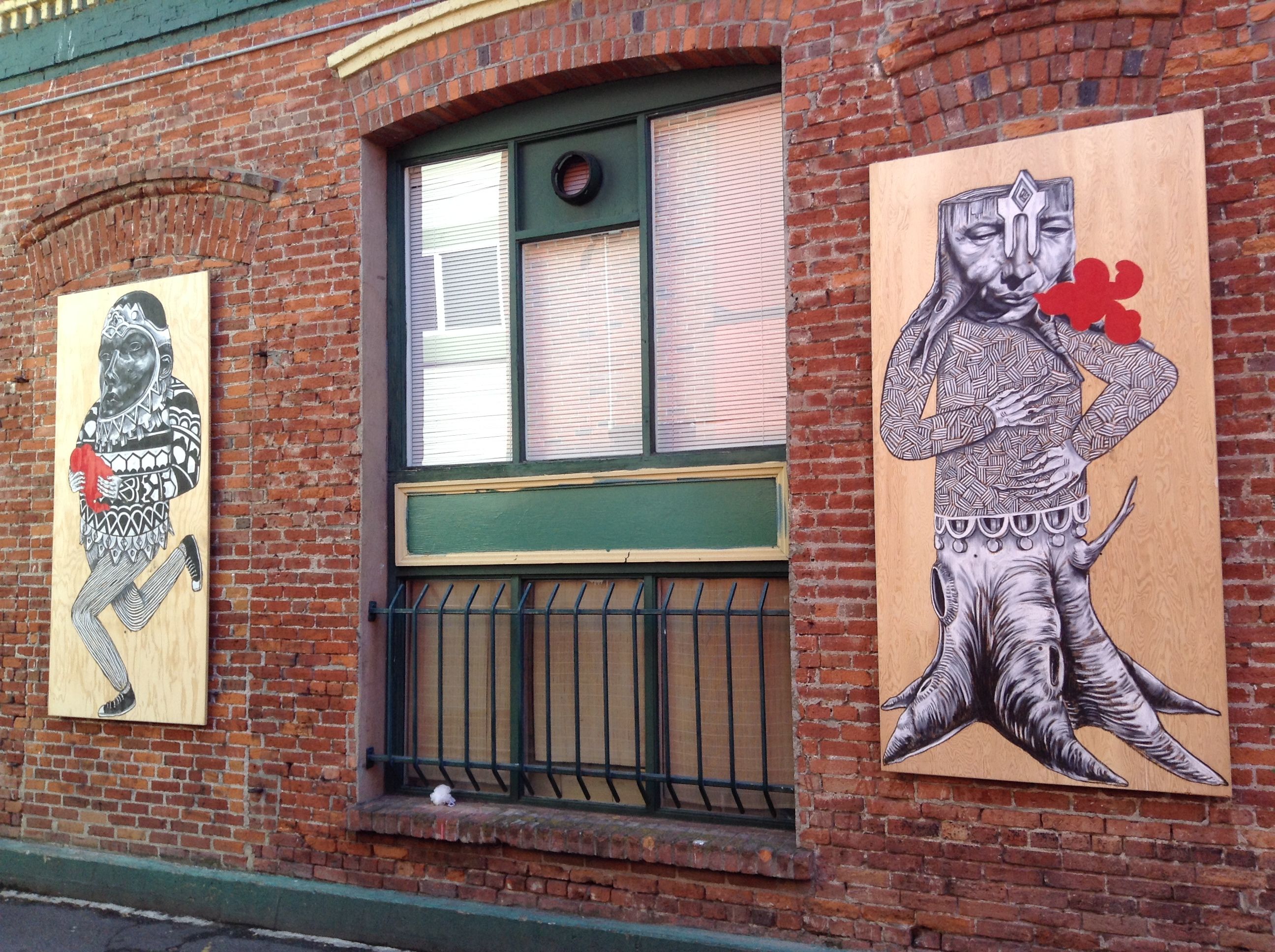 The inaugural artwork installation by Other (Troy Lovegates) depicted four patterned, black-and-white figures punctuated by bold red shapes. The art was created during the Reclaim the Streets: A Symposium on Art and Public Space, which was hosted in 2014 by Open Space. Other is a nomadic folk artist whose bright paintings cross the globe on the sides of rail cars and appear on walls around the world. He has called many places home, including Montreal, Berlin, Buenos Aires, Toronto, and most recently, San Francisco.