The City of Victoria and PATTISON Outdoor Advertising is proud to present a unique, high profile art opportunity for artists, craftspeople and artisans residing in the Capital Regional District including the Gulf Islands. 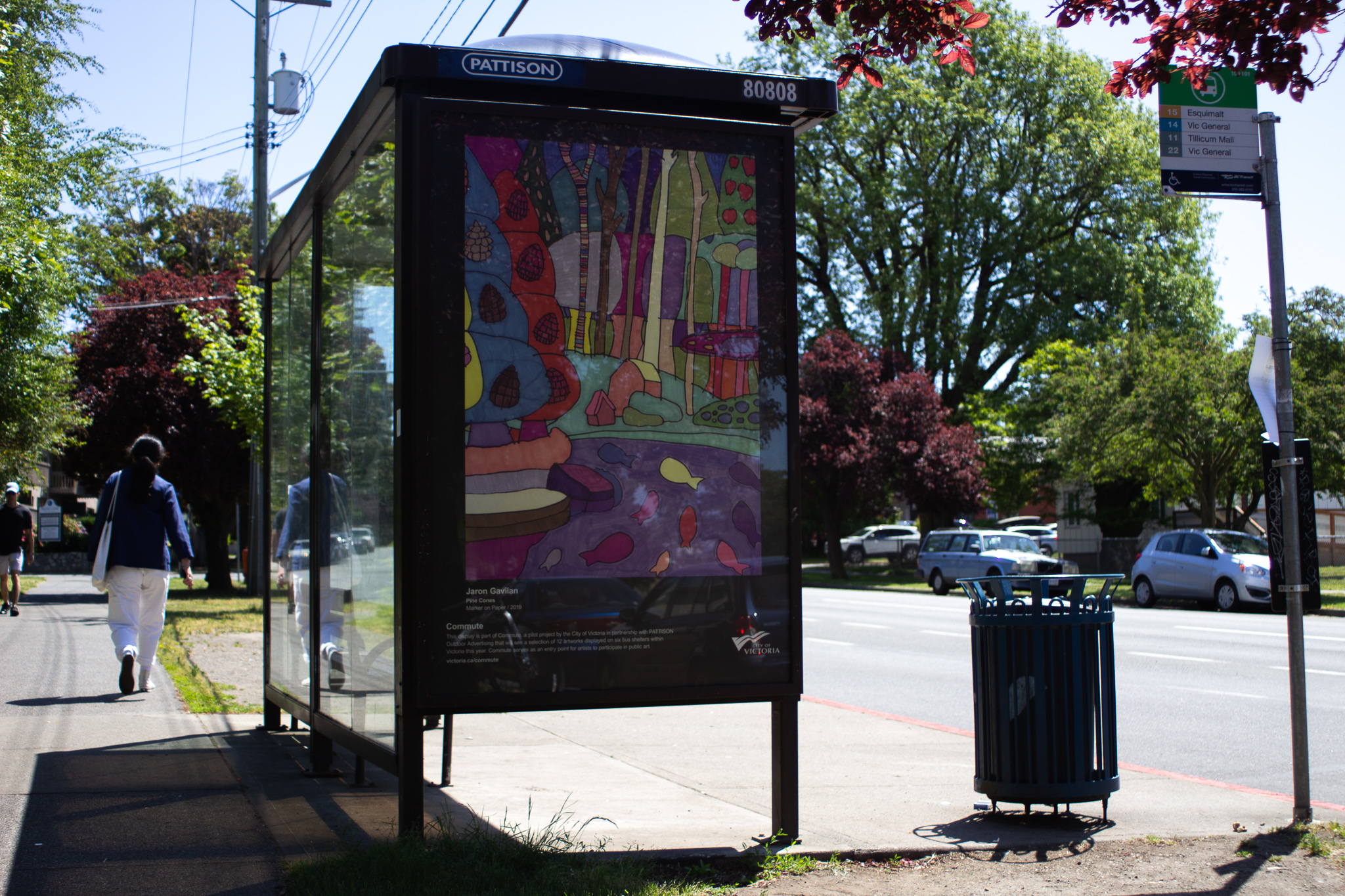 The Commute bus shelter exhibit provides emerging artists the opportunity to participate in public art and exhibit their artworks in Victoria. The temporary installation is designed to encourage dialogue and new ways of thinking about neighbourhoods and public spaces, inspire local artists, and cultivate future public artists and audiences.

The selected artists were chosen by a selection panel of local creative professionals and a menber of the Art in Public Places Committee.

Check Out the Art!

The first set of six artworks (in five locations) is now installed on bus shelters in downtown Victoria:

Sunrise to Sunset, 2019, vector graphic design
Lou-ann's English name is Lou-ann Neel, and she's from the Mamalilikulla, Ma’amtagila, and Da’naxda’xw on  hermum’s side of the family; and Kwickwasutaineuk, ‘Namgis and Kwagiulth on her dad’s side of the family. She comes from a rich history of artists on both sides of her family, and has been practicing in Kwakwaka’wakw design for over forty years. Lou-ann started in drawing and painting, and became very interested in learning to make traditional regalia such as button blankets made from wool fabric adorned with mother of pearl buttons, and dance capes made from deer and elk hide. She focused the next 25 years on textile works, including contemporary clothing and in the last two years, she's been apprenticing in wood carving.

Sunrise to Sunset: Lou-ann loves both the sunrise and sunset in Victoria, and appreciates the beauty of the natural world revealed by the sun and the moon.

Behind Representation, 2012, oil on canvas
Diego was born in Mexico City and moved to Sooke, BC in May 2019. His work focuses on landscape painting while creating visual metaphors of how we, as society, construct reality through sight and how this affects our relationship with the environment. Collectively, he has participated in exhibitions in USA, Argentina, Canada and Mexico. He obtained the first prize in Mexico’s Landscape Painting Biennial Luis Nishizawa in 2017. He is now steadily building his art career in BC.

Behind Representation: This large painting is a metaphor of reality as a simulation, as if all we see is only but a representation. Behind an abandoned theatre come a cumulous of ominous clouds, and behind them all black curtains of this huge stage which we call reality.

Summer Retreat, 2019, marker on paper
Tanya was born in 1975 in Vancouver BC and has been creating artwork from the moment she could hold a pencil. Highly inspired by multicultural aesthetics across the globe, Tanya’s work is an exploration of pattern, colour and expressive compositions. She works diligently as an artist studying and researching her subjects. This motivates her to paint and draw landscapes, abstracts and decorative motifs. Tanya is interested in creating art that evokes happiness within the viewer.

Summer Retreat is part of a series illustrating Tanya's memories of spending time with her family on a houseboat in Fisherman's Wharf in the summer and vacationing in a cottage on one of the Gulf islands in autumn.

Consolidation, 2016, pen and ink wash on paper
Esther's drawings reflect her interest in the powerful forces that shape our landscapes. Some of her earliest memories are of car trips to her grandmother’s home in England, during which her parents discussed the geology of the countryside. As a result, Esther developed an interest in landscapes that led her to study geography at the University of Victoria. Today, she uses tools from this discipline to explore her current home - British Columbia. Esther’s work has been exhibited at the Art Gallery of Greater Victoria, the Sooke Fine Art Show, the Sidney Fine Art Show, Xchanges Gallery, and arc·hive.

Consolidation is based on a landform that is made from a debris flow - a mass of loose mud, sand, rock, and water that travels down a slope under the influence of gravity. I use stylized wave-like geological map symbols to convey the movement of material that resulted in this landform.

Orange You Glad, 2019, sculpture
Samantha moved to Pender Island at the age of six. From there she moved around and lived in Victoria, Vancouver, Saltspring, Port Alberni and Tofino. She now resides in Victoria, BC. This array of moving while growing up created disorder in her social and home life. She finds comfort expressing disorder through the medium of sculpture. Her practice is about an expression of feeling, since she can never seem to find the right language to express what she feels.

Orange you Glad is a leather mold containing concrete that were held in draino for multiple days. The affect was the destruction of the leather exposing the concrete. Held on top of a hand mand box shelf.

Pine Cones, 2019, marker on paper
Jaron is a contemporary artist born and raised in Victoria BC. His colourful creations pay homage to both the natural world and the landscapes within his imagination. Vivid scenery, vivacious animals and botanicals, and everyday objects are brought to life with contrasting colours, illustrative line work and harmonious shapes. His unique personal style emanates the funny side of life and he is able to capture different emotions with his drawings.

Pine Cones: A whimsical rendition illustrating the ambience within a pine cone forest on the coast of British Columbia.

The Commute public art exhibit was developed in response to input the City received during engagement on its Create Victoria Arts and Culture Master Plan, when emerging artists asked for more opportunities to participate in and exhibit their art in Victoria.

The Commute call to artists invited emerging, Indigenous, multicultural artists and artists who don’t see themselves currently represented in the public art collection, to submit up to five suitable existing artworks, or create new artwork for consideration. Artworks were selected by Selection Panel. This competition was open to artists and artist teams residing in the Capital Region, including the Gulf Islands.