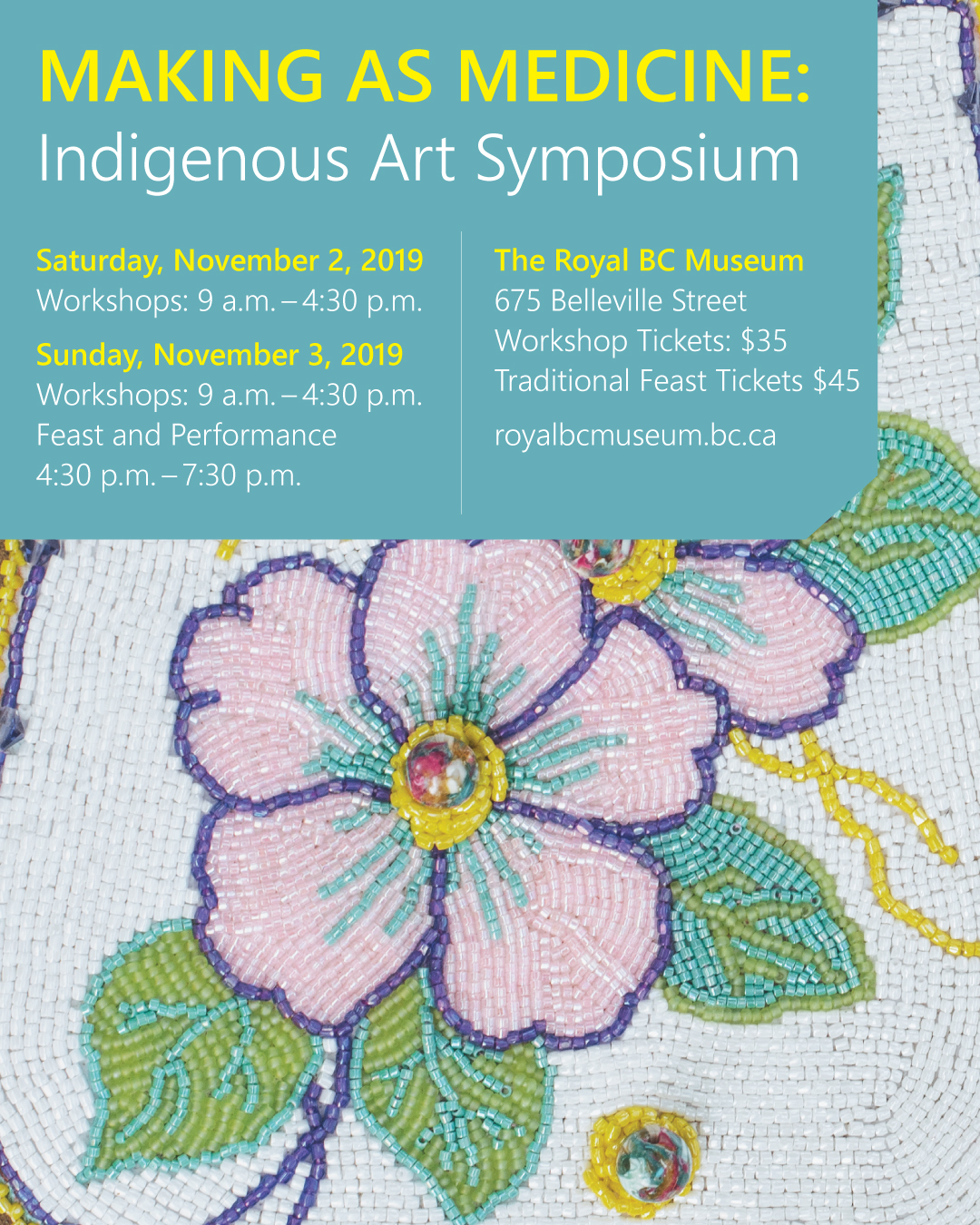 Making as Medicine: Indigenous Art Symposium was the third interactive Indigenous symposium hosted at The Royal BC Museum, in partnership with the City of Victoria and the Indigenous Artist Entrepreneur Program.

The two-day interdisciplinary and inter-generational event presented and explored Indigenous ways of making through engaging in traditional arts. The Symposium included workshops followed by a panel discussion, and cultural performances.

Each began with a formal group welcome facilitated by Lindsay Delaronde and Nicole Mandryk.

A public panel discussion followed the workshops on November 3, from 2:30 p.m. to 4:30 p.m. The panel was moderated by Lindsay Delaronde, and featured a discussion between Lou-ann Neel and LessLIE about their experiences as makers in the context of the economy, cultural appropriation, and establishing their careers through alternative pathways.

The panel discussion was free and open to the public.

Following the panel discussion on Sunday, there was a FREE 90-minute performance by A.N.S.W.E.R. Drum Group in the historical Mungo Martin House at the Royal BC Museum at 4:30 p.m.

Lindsay Delaronde was born and raised on the Kahnawake reservation and is a strong advocate for Indigenous voices, stories, culture and history. Delaronde has been living on the West Coast for the past 15 years, during which she earned a Bachelor of Fine Arts Degree at the Emily Carr Institute of Art and Design, followed by a Master of Fine Arts Degree from the University of Victoria. In 2016, Delaronde completed her second Master’s degree in Indigenous Communities Counselling Psychology from the University. She is currently the Indigenous Resurgence Coordinator in the Fine Arts department at UVIC.

Delaronde is an emerging professional multi-disciplinary visual artist who works in contemporary Indigenous performance and facilitator of traditional workshops, such as moccasin making, Iroquois beadwork, and Iroquois cornhusk dolls. All workshops are facilitated in a cultural significant way using circle, drum, medicines and prayer. Her areas of research are stemmed in Contemporary and Traditional First Nations art, expressive arts therapy and working with Indigenous and non- Indigenous peoples within the arts and counseling. Delaronde’s research focuses on healing, land- based, collaborative practice, cultural resurgence and social/political activism through the arts.

Nicole Mandryk is an artist and performer who grew up on the Lekwungen and Esquimalt territories. Nicole’s mother is Anishinaabe and Irish, and family was born in Oka yet were displaced from the River desert band (now known as Kitigan Zibi) and father’s side is Ukrainian and they settled in Cree territory (Winnipeg).
Nicole completed her bachelors in Psychology and minor in Indigenous studies at the University of Victoria whilst also working primarily with Indigenous youth at the VNFC.  She is presently an Elders Initiative Assist and Events Coordinator.
May Sam was born in Malahat where she was raised by her father and aunt. Later in life, she moved to the Cowichan Valley. May learned knitting from her father, aunt and then later from her mother-in-law. She has been knitting for 60 years and within her work she tries to challenge herself with new designs and blending in colours. Her work has gone international, with her knitted bags being a big hit at the 2019 Indigenous Language Conference in Victoria. May is a highly respected Elder whom is called upon by many people in community. She has done workshops with SD63, Camosun College, UVIC and the Esquimalt weaving group. It is an honour to have her with us at Making as  Medicine.

Maria Samson is a Coast Salish weaver, born in Victoria BC and raised in the Tsartlip community. Samson has been creating art with cedar and wool since 1996, and has facilitated cedar weaving workshops throughout southern Vancouver Island in Coast Salish Territory for the past 23 years. She currently works as an Aboriginal Infant Development Consultant for the Victoria Native Friendship Centre and delivers different types of programming for cultural ways of living.

lessLIE is the decolonized name of Leslie Robert Sam, a Coast Salish artist from the Cowichan Tribes. He works in the variety of media, but he is best known for his serigraph prints. His artwork draws on traditional iconographic elements and often has contemporary titles or texting fused with humor and irony. While working on his undergraduate degree in 1995, lessLIE began to study Coast Salish art. He holds a Bachelor of Arts degree and First Nation studies from Malaspina University College, and has done graduate work in Interdisciplinary studies at  The University of Victoria. He recently branched out with curatorial projects including writing and guest lectures. His work is exhibited both nationally and internationally. lessLIE’s work can be found in collections around the world and form a part of the permanent collections of The Art Gallery of  Greater Victoria and The National Gallery of Canada.

ANSWER an acronym for All Nations Strong Women for Education and Reconciliation, is an urban Victoria women’s drum group with representation from Nuuchahnulth, Dene, Mohawk, M’iqmaw, Anishnawbe, Metis and Cree peoples. This circle of women who deal with the lived trauma and impacts of colonialism use culture, song and drumming to heal. The women of ANSWER reside on Lkwungen and Esquimalt territories and are locally known as educators, healers, medicine women, artists, knowledge keepers, counselors, youth workers, social workers, sisters, cousins, elders, mothers, grandmothers, matriarchs, and warriors.