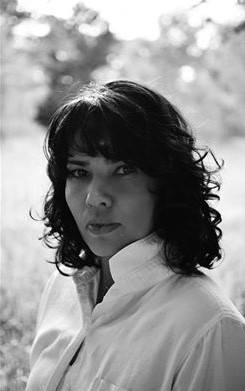 Iroquois Mohawk artist Lindsay Katsitsakatste Delaronde was the City of Victoria Indigenous Artist in Residence from January 2017 to January 2019. In January 2018, Lindsay's one-year term was extended until the end of the year.

Delaronde's submission was one of six the City received in response to a Request for Expressions of Interest, which was open to First Nations, Inuit and Métis artists and artist teams working in any artistic discipline who reside in the Capital Region, including the Gulf Islands.

During Lindsay's term as Indigenous Artist in Residence, she developed a range of projects in collaboration with other artists and the community. 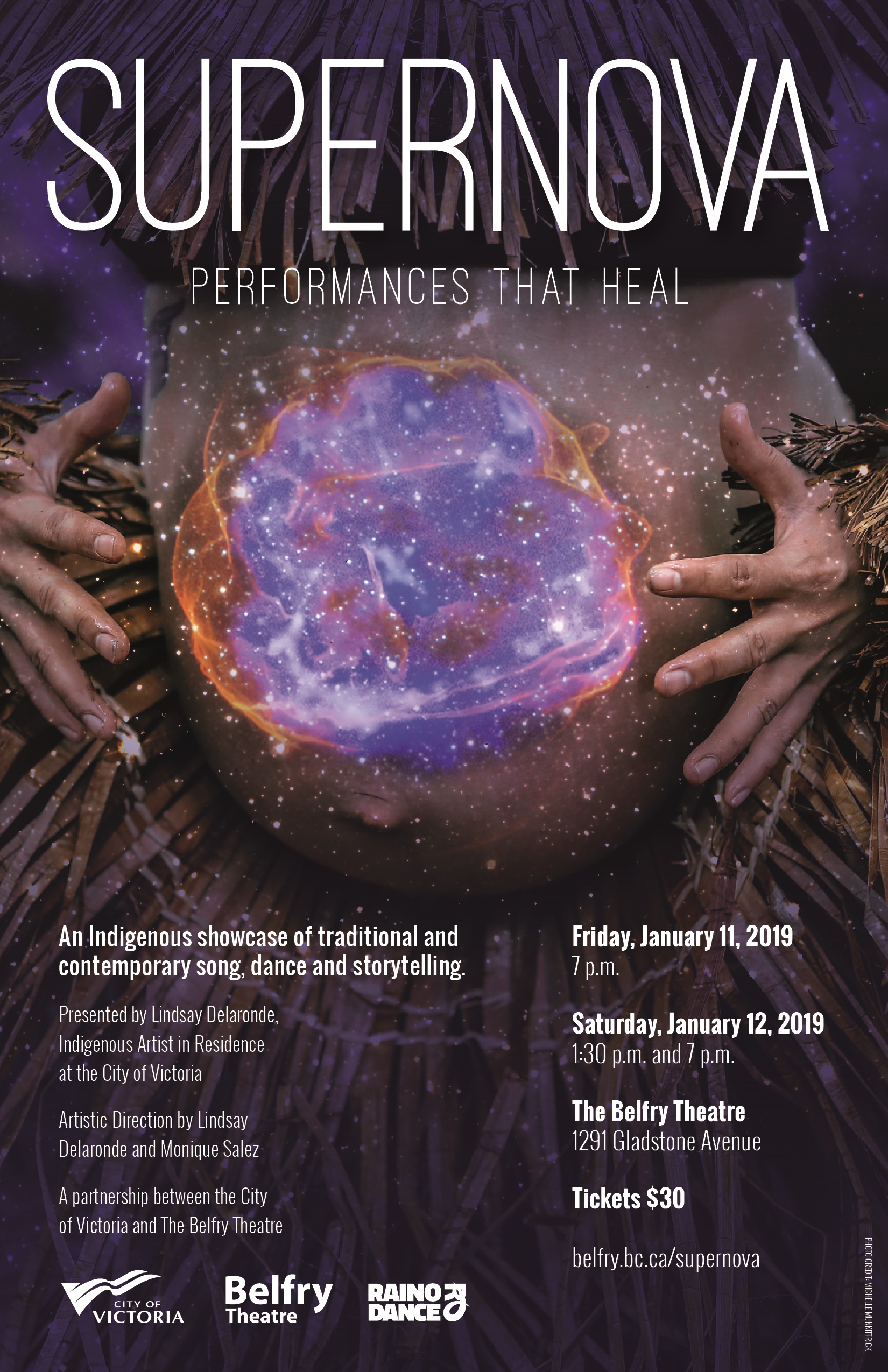 The community was invited to attend SUPERNOVA: Performances That Heal, the second all-Indigenous showcase presented by City of Victoria Artist in Residence Lindsay Delaronde at and in partnership with The Belfry Theatre in three performances on January 11 and 12, 2019.

This collection of performances invited new pathways for healing the spirit through song, dance, and storytelling, both traditional and contemporary.

From conception of ideas, to training, rehearsal and performance, SUPERNOVA was entirely rooted in holistic Indigenous worldviews.  It pushes the boundaries of European-based status quo and colonial expectations of effective performance creation by showcasing the powerful contributions of Indigenous peoples in Canada, not only in the realm of performance but also in all aspects of our communal life in this country. SUPERNOVA was Lindsay's final project for the City of Victoria in her role as Indigenous Artist in Residence.

In 2018, Lindsay participated in Sacred, the Indigenous multi-media art display at City Hall that showcases a range of traditional and contemporary art forms created by eight emerging and established Indigenous artists.

Curated by Indigenous curator Rose Spahan with the assistance of artist Eli Hirtle, Sacred features artworks throughout City Hall in a variety of media, including an indoor mural, an LED light painting, an outdoor projection, a short film, a poem, a series of photographs (by Lindsay) , and a series of silkscreened prints. All artworks have been created by Indigenous artists living on Vancouver Island. Learn more.

What is the purpose of art in reconciliation? That was a point of ongoing exploration for Lindsay Delaronde during her residency with the City of Victoria, and was the inspiration behind Forgive. The site-specific performance and video installation explored a narrative of Indigenous voices confronting colonial history.  Forgive explored the concept that forgiveness is a key to opening new doors and encourages us to choose it over resentment. The event took place June 16, 2018.

Forgive included a territory acknowledgement before a 20 minute film screening that captured multiple land-based performances. The film was broken into four sections, distinguishable by the use of the four medicine wheel colours. After the film there was an opportunity for the audience to actively participate by approaching the stage to light a candle as a personal act of forgiveness. The performance took place in early summer on the front steps of the Legislature building. Photo credit: Naomi Kennedy.

Produced by Lindsay Delaronde in partnership with the Belfry Theatre, Pendulum was a community-focused project, honouring Indigenous worldviews in relation to reconciliation and community healing. The show's multiple acts featured traditional and contemporary performances.

Pendulum represented not only the oscillation between life and death, love and sorrow, joy and pain, but also the pendulum that swings between traditional and contemporary forms of performance. The range of performance and music styles was designed to create a sensory, transformative experience for the audience – triggering body memory and interconnectivity.

The ACHoRd performance art piece co-created by a group of 13 Indigenous and non-Indigenous women, was performed on the steps of the Legislature as a part of the lead-up to Canada’s 150th on Sunday, June 25, 2017. Co-facilitated by Indigenous Artist in Residence Lindsay Delaronde and Monique Salez, owner and Artistic Director of Raino Dance Studio, ACHoRd represented the harmonization of many stories, lived experiences, and individuals in unity.

Earlier that year, Delaronde put out a call for female movers, singers, actors, and drummers of both First Nation and non-First Nation origin to participate in a collaborative, performative artwork. For 11 weeks, the group of women met for four hours every weekend to develop the art piece.

The movements were created from the personal stories of each participant as well as from the desire to resist, reclaim, and take action as a community of women. Creating culturally-infused public performances grounded in local protocol, history and Indigenous resurgence is a passion of Delaronde's and guides her creative practice. ACHoRd aimed to dismantle existing hypocrisies and injustices in the colonial legislative system while proposing new partnerships to reclaim women’s voices, bodies and politics.

There were opportunities for audience participation during the performance. Audience members could support the group by wearing a gray top and black pants, shorts or skirt, or keep pace with the group through sound, which required attending two final rehearsals.

Art as Ceremony Celebration and Exhibit

The "Art as Ceremony" celebration took place on September 9, 2017, opening with a welcome by Lindsay Delarond and a performance by ANSWER drum group. A slideshow followed with opportunities to speak with a group of six artists from Our Place community whose artwork was created over the course of 10 workshop sessions led by Delaronde. The art works included cornhusk dolls, medicine pouches, drawings, collage, silk-screen printing, clay and moccasins. The "Art as Ceremony" exhibit was on display from September 11 - 15 at City Hall.

We Bring Medicine to the Street

We Bring Medicine to the Street was a street performance by Lindsay Delaronde, co-created by colleague Pascalle Ellefsen, an emerging artist residing in Victoria. The performance was a call to action through performance in the cityscape -- artists washed the pavement with water and medicines. This work attempted to facilitate integration of shifting perceptions - both personal and collective - of place and history. Using old ways of healing and prayer to heal the soul-wound of colonialism was the purpose of the project.

Born and raised on the Kahnawake reservation, Delaronde has been a professional artist for the past five years. She began this journey by travelling to Vancouver to earn a Bachelor of Fine Arts Degree at the Emily Carr Institute of Art and Design followed by a Master of Fine Arts Degree from the University of Victoria. Recently, Delaronde completed her second Master’s degree in Indigenous Communities Counselling Psychology from the University.

Delaronde is a multi-disciplinary visual artist who works in print-making, painting, drawing, video and performance. The intention of her work is to manifest the relationships between Indigenous and non-indigenous and also intercultural respect among allies, nation-to-nation. Currently, Delaronde is a self-employed artist and moccasin–maker in Victoria.

Delaronde is a strong advocate for Indigenous voices, stories, culture and history. She dedicated her art project War Canoe Paddle Project 2009, which features current and archival photo transfers onto cedar paddles, to honour the Coast Salish War Canoe racing history. Her recent and first solo exhibition In Defiance at the Legacy Downtown supports the voices of Indigenous women on Vancouver Island and the Mainland of British Columbia. The exhibit showcased individual portraits that dismantle the negative stereotypes of First Nations women by having the individuals portray themselves more authentically reflecting truth of diversity, power and respect. Delaronde has also co-illustrated an Indigenous children’s book, The Corn Chief, and last July collaborated on Bondage, a Coast Salish narrative dance performance presented by Speak Outside, MediaNet and the Comox Valley Art Gallery.

“I hope to create artworks that reflect the values of this land, which are cultivated and nurtured by the Indigenous peoples of this territory,” said artist Lindsay Delaronde. “I see my role as a way to bring awareness to and acknowledge that reconciliation between Indigenous and non-Indigenous peoples is a process, one in which I can facilitate a collaborative approach for creating strong relationships to produce co-created art projects in Victoria.”

The Indigenous Artist in Residence will work as an independent contractor from March 2017 to March 2018. The successful candidate will work 20 hours per week during the one-year term for a total fee of $42,000. The program is funded by the City’s Art in Public Places Reserve Fund. Artwork materials, fabrication and installation may be funded by a capital project’s budget, with up to $30,000 from the Art in Public Places Reserve Fund.

The City's Art in Public Places Policy encourages the creation of new works of art for the enhancement of public spaces. The purpose of the policy is to:

Learn more about the City's Art in Public Places Policy.