Sacred is an Indigenous multi-media art display at City Hall that showcases a range of traditional and contemporary art forms created by eight emerging and established Indigenous artists.

Curated by Indigenous curator Rose Spahan with the assistance of artist Eli Hirtle, Sacred features artworks throughout City Hall in a variety of media, including an indoor mural, an LED light painting, an outdoor projection, a short film, a poem, a series of photographs, and a series of silkscreened prints. All artworks have been created by Indigenous artists living on Vancouver Island. (Below: artwork by Dylan Thomas)

The opening reception for Sacred took place on National Indigenous Peoples Day (June 21, 2018) at City Hall. The event was free to the public and included a performance by the Lekwungen Dancers, a poetry reading, film screening and the opportunity to meet the curators and several of the featured artists and to view the artworks. 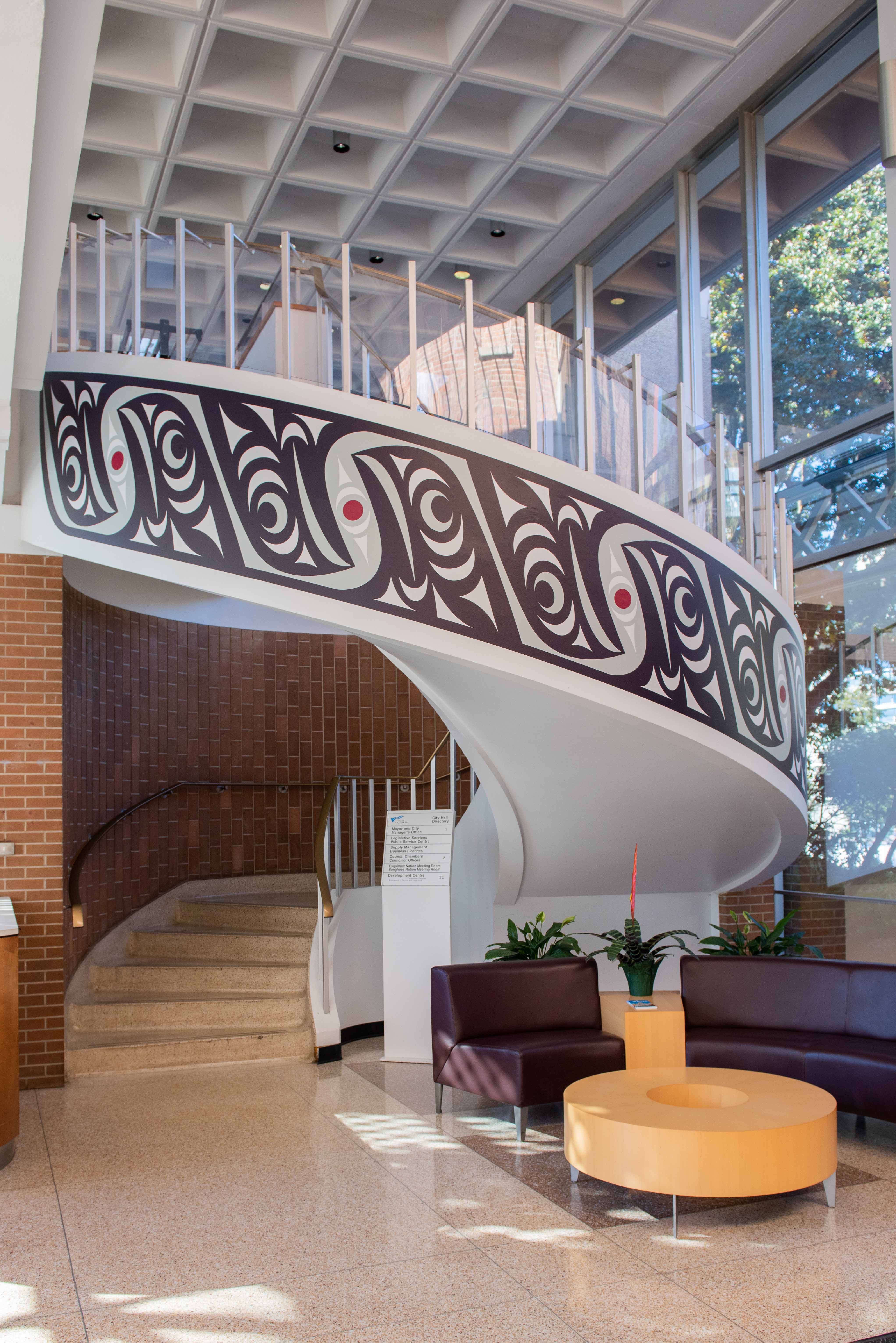 Rose Spahan is a Salish artist, teacher and curator, who works with emerging, Indigenous artists. Spahan has curated 13 shows over 32 years throughout British Columbia, in addition to teaching, lecturing and working as an arts administrator and guest curator and sitting on arts juries.

Raised within her people's territories on Vancouver Island, she received her Bachelors Degree in Fine Arts with First Class Honours in 1989 from the University of Victoria. Rose has exhibited her work in Canada, the United States and Ljubjana. Her works may be found in private collections in Italy, Saudi Arabia, Germany, England and throughout North America. Selected works by Spahan have been published by Theytus Books, Institute of American Arts Press, Mix Magazine, and International Biennial of Graphic Arts.

Eli Hirtle is a Nehiyaw (Cree)/British/German filmmaker, photographer, beadworker, visual artist and storyteller whose practice involves documenting and making work about Indigenous cultural resurgence and revitalization. His current interests revolve around the Nehiyawewin language, and the possibilities for art to educate, inform, and instigate critical discussions. Eli was born and raised in Victoria on Lekwungen territory and is forever grateful for the teachings he has received and the relationships he has formed here that continue to influence and guide his art practice. Eli is currently attending Camosun College's Indigenous Family Support Certificate Program so that he can continue to work with Indigenous youth to empower and inspire their creative voices and expression. Eli is one of the featured artists in the Sacred installation and assisted Rose Spahan with the curation of the artworks.

Jesse Campbell is of Métis, Cree, Scottish, and English ancestry currently living in the unceded Lekwungen territory of Victoria. He has been a practising mural painter since 2010 and has helped produce many public art pieces throughout Greater Victoria and is now leading his own projects throughout the city. In addition to his mural practice, Jesse spends time mentoring youth on the craft of mural painting and understanding the diverse forms of Indigenous art across North America. Since a youth, he has been inspired by the work of natural historians throughout the world as well as the writings of Joseph Campbell and the stories of the knowledge keepers of the territories he has lived. Jesse began taking his art more seriously while being mentored under Alex Clark, a long-time teacher in the Victoria School District who recognized his talent and taught him to live and work in a good way. Jesse hopes to continue passing on these teachings through his art, his collaborations, and his students.

Lindsay Delaronde was born and raised on the Kahnawake reservation and has been a professional artist for the past five years. She began this journey by travelling to Vancouver to earn a Bachelor of Fine Arts Degree at the Emily Carr Institute of Art and Design followed by a Master of Fine Arts Degree from the University of Victoria. Recently, Delaronde completed her second Master’s degree in Indigenous Communities Counselling Psychology from the University. Delaronde is a multi-disciplinary visual artist who works in print-making, painting, drawing, video and performance. The intention of her work is to manifest the relationships between Indigenous and non-Indigenous and also intercultural respect among allies, nation-to-nation.

Brianna Marie Dick TEALIYE (ta-a-th-le-ut) is from the Songhees/Lekwungen Nation in Victoria through her father's side with roots to the Namgis Kwakwaka'wakw people in Alert Bay through her mother's side. She is the oldest of six siblings from four parents whose backgrounds are Lekwungen, Kwakwaka'wakw, Mowachaht/Muchalaht and Nuu cha nulth. TEALIYE was brought up around her father's territory of the Lekwungen people, learning many of the teachings from her grandfather Skip Dick and family members. Since her teenage years, she has practised art; learning from artists Butch Dick, Bradley Dick, Mike Dangel along with constantly being inspired by various Indigenous artists from across Canada. She has had the honour of working on murals such as the third phase of the Unity Wall at Ogden Point, the Rock Bay Mural project on Government and Pembroke Streets, and leading the mural project in the Victoria Native Friendship Centre's Youth Department. TEALIYE looks forward to the future connections and continuously learning in her art and life.

lessLIE was born in 1973 in Duncan, BC. lessLIE's "colonized, Catholic, Canadian name" is Leslie Robert Sam. His "decolonized artist's name" is lessLIE. Picasso once said that "art is a lie that tells the truth." lessLIE is living this perspective in the spirit of trickster traditions. lessLIE has a Bachelor of Arts degree in First Nations Studies from Malaspina University-College. While working on this undergraduate degree, lessLIE began to study Coast Salish art in 1995. lessLIE is currently working on a Master of Arts degree in Interdisciplinary Studies with a focus on Coast Salish art at the University of Victoria.

Nicole Neidhardt is Diné (Navajo), Scottish, German, and a blend of European ancestry. She grew up in Santa Fe, New Mexico and is currently living on Lekwungen territory in Victoria. Nicole graduated with a Bachelor of Fine Arts and Business Minor from the University of Victoria. She is a practising visual artist, muralist, arts administrator and overall Indigenous arts activist. A multitude of perspectives shapes her way of viewing the world, but her Diné self is what grounds her. Art has played a crucial role in her life, providing opportunities to connect with other Indigenous peoples, and she has seen how art can be effectively used to promote the resilience, beauty, and diversity found in Indigenous nations across North America. Art has been her tool to share Indigenous ideologies, histories, and contemporary realities.

Philip Kevin Paul is a member of the WSÁ,NEC Nation from the Saanich Peninsula on Vancouver Island. His work has been published in BC Studies, Literary Review of Canada, Breathing Fire: Canada’s New Poets and An Anthology of Canadian Native Literature in English. Philip Kevin Paul’s second book of poetry, Little Hunger, was shortlisted for a 2009 Governor General’s Literary Award. His first book of poetry, Taking the Names Down from the Hill, won the 2004 Dorothy Livesay Award for Poetry.


Qwul’thilum (Dylan Thomas) was born in Victoria in 1986, and is a Coast Salish artist from the Lyackson First Nation of Valdes Island. Although Dylan grew up in the urban environment of Victoria, he was exposed to Coast Salish art at a young age because his family continues to participate in their culture and tradition. This exposure ignited a lifelong passion for Coast Salish art and, eventually, led him to seek guidance from established artists. Dylan received training in jewelry techniques from the late Seletze (Delmar Johnnie) and apprenticed under Rande Cook in all mediums of the art. Dylan’s artwork has been published in the Journal of Mathematics and the Arts (Taylor and Francis), and in Contemporary Art on the Northwest Coast by Karen & Ralph Norris. Dylan has been featured in many art shows across the continent, and in 2013 – alongside Rande Cook, lessLIE, and Francis Dick -- was featured in the Art Gallery of Greater Victoria’s Urban Thunderbirds/Ravens in a Material World art show. In 2016, Dylan held his first solo exhibit, Sacred Geometry at Alcheringa Gallery in Victoria. Along with Rande and Delmar, Dylan’s other artistic influences have been the late Art Thompson, Susan Point and Robert Davidson.