Established in 2008, the Signs of Lekwungen (pronounced Le-KWUNG-en) is an interpretive walkway along the Inner Harbour and surrounding areas that honours the art, history and culture of the Coast Salish people who have resided in the Victoria area for hundreds of years. 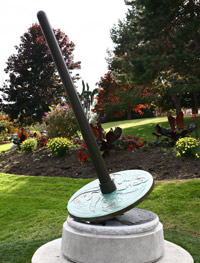 The Songhees and Esquimalt Nations are part of the Coast Salish family and are descendants of the Lekwungen family groups. Lekwungen is the original language of this land.

The site markers are placed at seven culturally-significant sites to the Songhees and Esquimalt Nations along the Inner Harbour and surrounding areas, which are as follows: 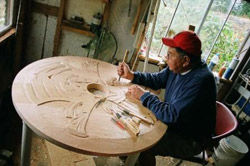 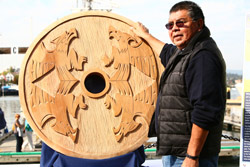 For an online version of the Signs of Lekwungen brochure, which contains a map and descriptions of each site, click here [PDF - 1.2 MB].

Print brochures are available at a number of Victoria locations, including:

Molds of the original cedar carvings were created by Jack Gibson, a casting specialist and well-respected sculptor among the First Nations. The molds were then cast in bronze by Jacob Burton of the Burton Bronze Foundry on Salt Spring Island.

Each bronze casting is a disk, 106.7 centimetres (42 inches) in diameter, which is anchored to a brown powder-coated aluminum pole. Site markers are approximately 2.5 metres (8 feet, 4 inches) in height and weigh close to 455 kilograms (1,000 pounds).

Each spindle whorl is anchored on an angle to a grey granite base. Underneath lies a sandblasted map of the Inner Harbour, illustrating the locations of the seven markers.

The base's top is inscribed with the traditional place name (where applicable), phonetically in Lekwungen as well as in English.

Clear, close-grain red cedar was used to carve the whorls. The cedar tree was, and still is, sacred to the Coast Salish. From the cedar tree, ancestors were able to make such items as clothing, blankets, houses, canoes, paddles, totem poles and paint brushes.

Chief Robert Sam of the Songhees Nation and Chief Andy Thomas of the Esquimalt Nation nominated Butch Dick as the commissioned artist for the project.

Butch Dick is the master carver for the Signs of Lekwungen. Trained in fine art and graphic design, Butch has taught First Nations Art and Culture in School District 61 for more than 20 years and is currently an Assistant Professor at the University of Victoria, teaching an Indigenous Learning course.

His sons, artists Clarence and Bradley Dick, assisted him with two of the whorl carvings.

Below is a list of the site marker locations and the themes of each carving. The Lekwungen and English names for each site marker and their cultural significance can be found in the Signs of Lekwungen brochure [PDF - 1.2 MB].

The seven original carvings are displayed in the foyers of Victoria City Hall.

A blessing and unveiling ceremony was held at the end of September at the site marker located on the lower causeway of the Inner Harbour. The purpose of this event was to convey the artistic, historical and cultural significance of the seven sites, honour the work of Coast Salish artist Butch Dick, and promote the Signs of Lekwungen as an interpretive walkway for residents and visitors to explore.

In 2004, the City of Victoria, Songhees and Esquimalt Nations, Provincial Capital Commission, and Greater Victoria Harbour Authority, developed a concept for a self-guided, interpretive walkway along the Inner Harbour and surrounding areas that would promote the artistic, historical and cultural contributions of the Coast Salish people. The walkway would consist of the installation of site markers at culturally-significant sites.

In 2006, project research commenced. The initial idea was to install the original cedar carvings at the base of the spindles. Due to concerns over the preservation of the carvings, it was decided that bronze castings would better serve the purpose.

By 2008, all seven carvings were completed. Work then began to create the molds at the Jack Gibson Studio Gallery in Richmond for casting in bronze at the Burton Bronze Foundry on Salt Spring Island. All seven site markers were installed in Victoria by the end of September 2008.