On June 30, 1956, the Story Pole was erected in Beacon Hill Park. Carved by a team led by Mungo Martin, Kwakiutl tribal chief and renowned carver, the Beacon Hill Park Story Pole stands majestically overlooking the Strait of Juan de Fuca. When installed, it was the world's tallest free-standing story pole. 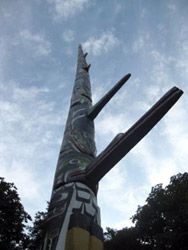 Selecting from a 1,457 hectare (3,600 acre) timber stand in Sooke, Ted Shaw felled the tallest, straightest cedar he could find. After the 40.5 metre (133-foot) tree was delimbed, it was pushed and dragged to Muir Creek and towed by tug into Victoria. From the Inner Harbour, it was then taken to Thunderbird Park's carving shed where Mungo Martin, his son David, and Henry Hunt laboured to create it.

In 2011, the City of Victoria worked in partnership with First Nations artists Jonathan Livingston and Calvin Hunt (a descendant of Henry Hunt) to clean and re-paint the story pole, which was showing its 55-year age. The story pole remained standing while the work took place on scaffolding up to 37 metres in height. The restoration was completed in early July 2011. 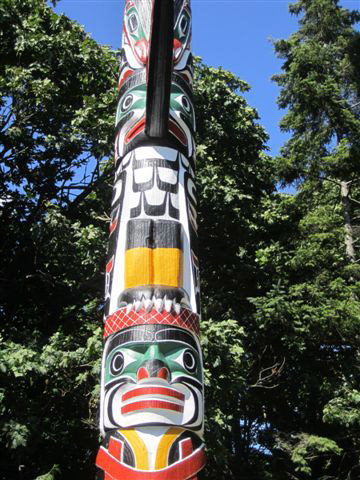 The average life span of a totem pole is 50 years. Tradition sees old totem poles return to the earth at the end of their natural lives so that stories can continue for future generations. Within 10 years, the Beacon Hill Park Story Pole will be lowered to allow it to share its rich history and stories with the earth. 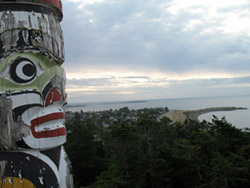 Over the years, the Beacon Hill Park Story Pole was painted four times, with major wood restoration including repairs, re-carving and re-painting taking place over a year span in 2000. The previous re-painting took place in 1989.

In July 2000, it was discovered that the story pole had decayed to a point where 'restoration would not be an option.' The extreme rot in the pole had resulted in an immediate need to lower this magnificent landmark. However, just as a dream brought the story pole to Victoria in the 1950's, another dream awakened to have the pole preserved and restored "To Rise Again." Through the expertise of many in wood restoration, and especially the skill and tireless efforts of Coast Salish artist Master Seaman Vern Point, with the assistance of community volunteers, the world's tallest story pole was resurrected a year later. The morning of October 29, 2001 saw the return of the cranes and their skilled operators. Before noon that day, the story pole did 'rise again.' On November 3, 2001, the newly restored story pole was unveiled.