Victoria's trademark hanging baskets are a sign that summer has arrived.

The City's hanging baskets add colour and vibrancy to boulevards and community spaces. The baskets are designed, grown and assembled by staff and hung on lamp posts in early June each year.

Plants for the baskets are grown in the City of Victoria's nursery, located in the southeast corner of Beacon Hill Park. In late April, a crew of gardeners begins construction of the hanging baskets, which takes place over a four-week period.

After the baskets are made, they are conditioned for one week in the greenhouse and then moved outside to acclimatise. In early June, the baskets are placed on the City's signature lamp posts.

The City waters the hanging baskets every night throughout the summer, between 10:45 p.m. to 7:15 a.m. Trucks transport water in 2,250 litre tanks, and hand-held wands are used to water the flowers. Park staff give each basket 6.5 litres of water containing a trace amount of fertilizer. Baskets in exposed areas are watered six to seven times per week, and baskets in sheltered locations are watered four to five times per week, depending on the weather.

Shade baskets were introduced in the 1990s as the City's boulevard trees grew larger and cast more shade. Shade basket plants are selected for their ability to thrive in shady conditions, away from direct sun. 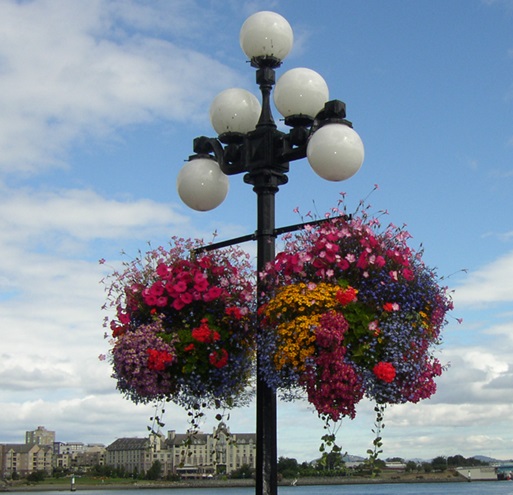 Introduced to celebrate the 75th anniversary of the City of Victoria's incorporation in 1937, Victoria's hanging flower baskets are now a trademark recognized around the world.
In 1936, City Parks Administrator Herb Warren was tasked with researching the prospect of placing hanging baskets on the streets of Victoria in celebration of the City's 75th anniversary of incorporation. Basing his research on the moss-lined wire baskets in England, several hundred sun baskets were placed on city streets in the summer of 1937.
When Victoria's baskets were first introduced, the practice of hanging flower baskets in public areas was limited to a few European cities. Many of the plants used in those baskets would not have performed well in Victoria's climate. The original Victoria sun basket included miniature roses, fuchsias, begonias, petunias and geraniums.
Go to Top