Since 2010, a mother orca and her calf have taken up residence in Victoria's Inner Harbour - in the form of a three-dimensional horticultural display. 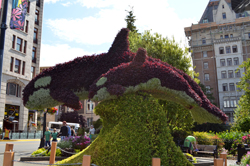 The Surfacing display, otherwise known as "the orcas" is a four-metre tall and six-metre long garden display of a mother and baby orca riding a wave. The display was inspired by similar garden structures in Burnaby and Old Montreal's Mosaiculture Garden.

"The orcas" have made their home on the southeast corner of Humboldt and Government Streets, across from Tourism Victoria since 2010. The unique garden display is designed to enhance Victoria's downtown and is a popular photo opportunity.

The horticultural display is portable and it is a temporary, seasonal installation. Each fall, it is transported back to the Beacon Hill Park nursery to winter in a greenhouse.

Watch for "the orcas" downtown this summer!

In 2010, there were two phases of construction - the design and manufacturing of the frame, and its preparation and planting as a three-dimensional garden bed.

The frame took five months to construct, using steel in a grid-like fashion. The interior of the frame is hollow.

Preparation for planting the steel frame begins each February in the Beacon Hill Park nursery. Over a two-week period, Parks staff cover the frame with a landscape fabric and fill it with 5.5 cubic metres of soil mixed with sand for drainage.

Nursery staff plant 10,000 plants consisting of varieties of Alternanthera, Santolina, and Festuca, annuals that are known for their colourful foliage and easy maintenance.

Maintenance of the display consists of bi-monthly trimming and regular watering.

The City of Victoria contracted Sandra Bilawich of Elemental Designs in Vancouver to design and construct the frame. Bilawich was selected as the designer due to her proven track record in designing and constructing horticultural displays for Burnaby and Coquitlam.