Ross Bay Cemetery, named for its unique oceanside location at Ross Bay, has been in continuous use since 1872 and is maintained and managed by the City of Victoria. 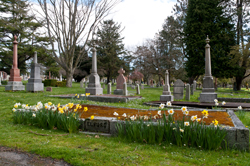 Ross Bay was named after Isabella Mainville Ross. Her husband, Charles Ross, a Hudson Bay Company chief trader, oversaw the building of Fort Victoria in 1843, but died soon after in 1844. In the 1850s, Isabella Ross, an Indigenous woman, was the first woman to be a registered landowner in British Columbia. She named her 99-acre property overlooking Ross Bay Fowl Bay Farm because of its abundant waterfowl. Unfortunately, the farm was not successful and Isabella gradually sold portions of the property to individual buyers.
The City of Victoria purchased the remote slope overlooking Ross Bay from Robert Burnaby for use as a cemetery in 1872. Isabella Ross died in 1885 at the age of 77 and was buried in an unmarked grave at Ross Bay Cemetery. In 1994, the Old Cemeteries Society installed an interpretive plaque at her gravesite.

A fine example of a Victorian-era cemetery, Ross Bay Cemetery has been designated a Municipal Heritage Site. A number of prominent and well-known people are buried at Ross Bay Cemetery, including British Columbia's first governor, Sir James Douglas; artist Emily Carr; and the man responsible for the Cariboo Gold rush, Billy Barker.

The Old Cemeteries Society of Victoria is installing a memorial entrance gate at Ross Bay Cemetery to mark the cemetery's 150th anniversary in 2023. The project also includes brass plaques that show the cemetery's name and a brief history.

The Society has been working with the City for a number of years on plans to install the gate at the Stannard Street entrance. The Society has received a Heritage Alteration Permit and authorization from the City and will continue to work with City staff throughout the project.

Construction begins in September 2022 and is scheduled to be completed by January 2023.

Information about the project is available at oldcem.bc.ca.

The City allows full interments as well as interments of cremated remains at Ross Bay Cemetery. To learn more, please see below.