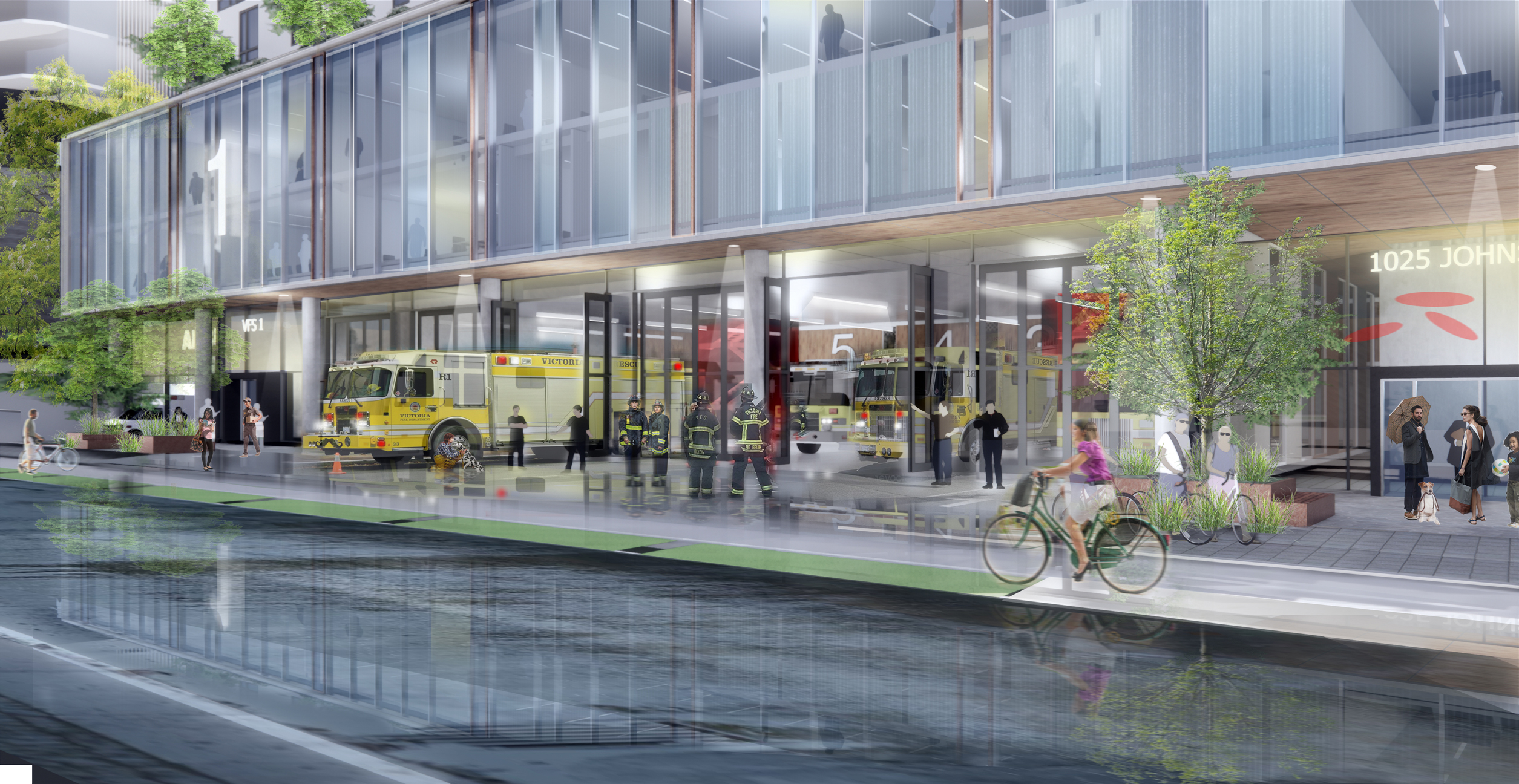 In a first for the region, the 12-storey building will include 130 purpose-built affordable homes for low- and moderate-income seniors, families and individuals. With funding from BC Housing, Pacifica Housing will own and operate the top eight storeys of the building. This new housing is part of more than 3,000 new affordable homes either completed or underway in the Capital Region by the Province, including more than 900 underway in Victoria.

The new 41,700 square-foot downtown facility replaces the current 26,700 square-foot fire headquarters building on Yates Street that has served the citizens of Victoria since 1959. In addition, BC Emergency Health Services (BCEHS) has agreed to lease 3,200-square-feet of space from the City to operate a stand-alone, downtown rest and ready location for paramedics under a planned 20-year co-service agreement.

The new public safety building will meet new BC Building Code standards for buildings designed to remain operable post disaster. This means it will be built to a seismic design load that is significantly higher than typical commercial buildings. After an earthquake, the new building will be able to be safely re-entered and used to deliver emergency services.

The new Victoria public safety building is being built under an agreement reached with local developer Dalmatian Developments Limited Partnership, a Jawl Residential and Nadar Holdings Ltd. venture, as part of a new mixed-use development.

The City will pay $33.7 million to purchase and own the turnkey facility as part of the broader development.
This will be paid for through available funds in the City’s Debt Reduction Reserve. There will be no property tax impact and no grants required from senior levels of government. Under the agreement, the City made an initial refundable deposit, with the remaining payment made upon completion and acceptance of the facility.

Over the next few months, people can expect to see the building take shape. Construction is anticipated to be completed by early 2023. 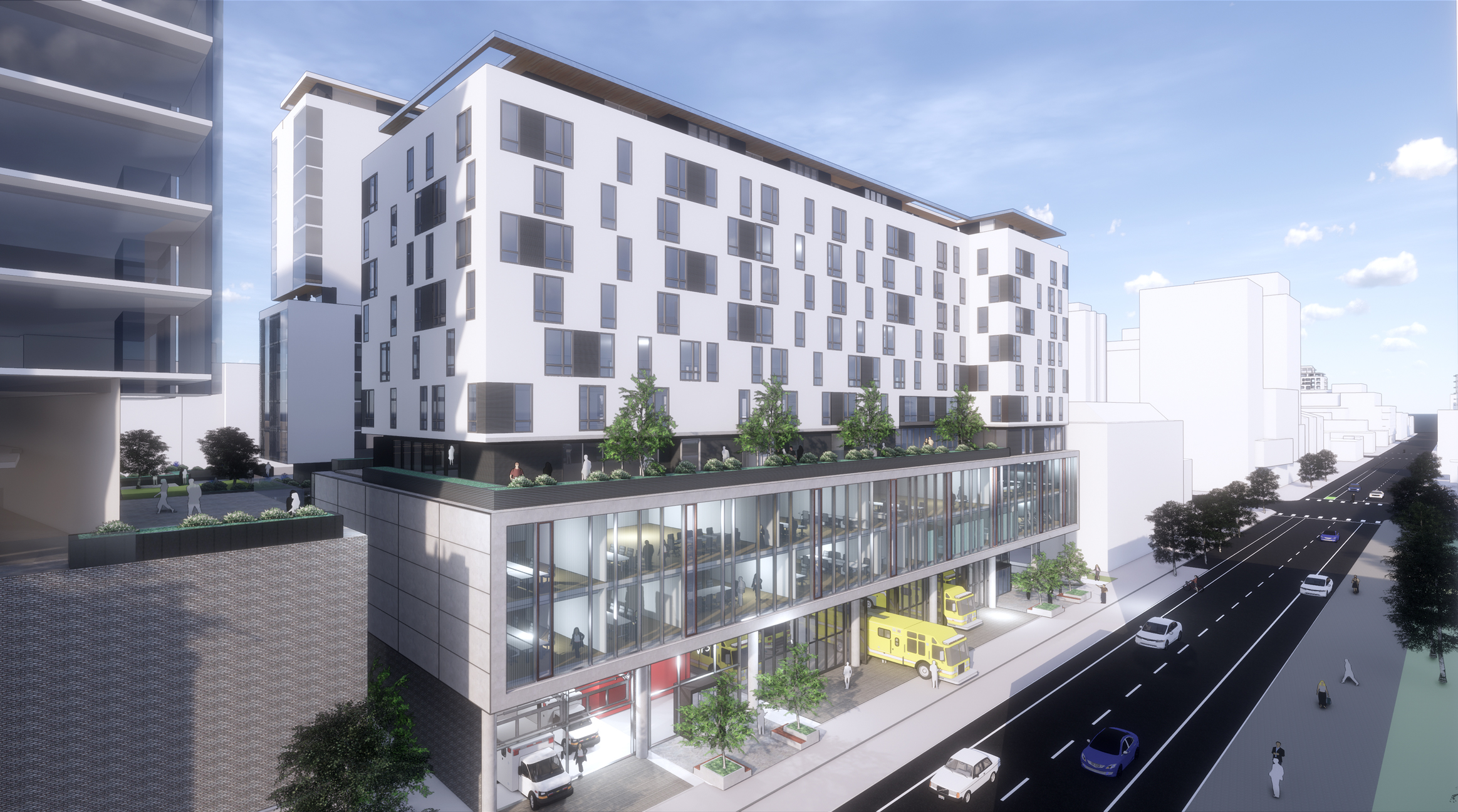 Following a public hearing on October 24, 2019, Council voted to approve a rezoning application, a development permit application, and an Official Community Plan amendment to increase the density and add residential uses for a phased development that includes four development areas with four main buildings (12, 14, 15 and 17 storeys).

Mixed housing, including 130 units of affordable housing, will be operated by Pacifica Housing. Commercial and retail space, a public plaza and a new post-disaster building for Fire Hall 1 are included in the plans. Learn more.

On March 19, 2018, it was announced that a new Victoria public safety building will be built downtown under an agreement reached with local developer Dalmatian Developments Limited Partnership, a Jawl Residential and Nadar Holdings Ltd. venture.

The state-of-the-art, post-seismic rated facility will be located on Johnson Street as part of a new mixed-use development adjacent to Pacific Mazda.

The 41,700 square-foot facility replaces the current 26,700 square-foot fire headquarters building that has served the citizens of Victoria since 1959. The new facility will house fire and rescue services and Victoria’s first purpose-built Emergency Operations Centre. In addition, BC Emergency Health Services (BCEHS) has agreed to lease 3,200-square-feet of space from the City to operate a stand-alone facility for paramedics and four ambulances under a planned 20-year co-service agreement.

The proposed public safety building will be built to meet the upcoming changes to the BC Building Code standards for buildings designed to remain operable post disaster, which means it will be built to a seismic design load that is 50 per cent higher than typical commercial buildings that will be built under the new code’s increased seismic requirements. After an earthquake, the new building will be able to be safely re-entered and used to deliver emergency services.

At a meeting on March 22, 2018, Victoria City Council authorized funds in its 2018 Financial Plan. The City will pay $33.7 million to purchase and own the turnkey facility as part of the broader development. Additional costs to the City will include off-site servicing, sidewalk improvements, equipment and project management, bringing the total cost for the project to $35.9 million. This will be paid for through available funds in the City’s Debt Reduction Reserve. There will be no property tax impact and no grants required from senior levels of government. Under the agreement, the City will make an initial refundable deposit, with the remaining payment made upon completion and acceptance of the facility.

In February 2016, Council approved in principle using up to $30 million from the City’s Debt Reduction Reserve for the procurement of a new Fire Department Headquarters at either the existing site or a new site identified through the Request for Qualifications market sounding process. The $30 million did not include funding that may be required for land purchase or any additional multi-use components such as BCEHS.

Dalmatian Developments is working with HCMA Architecture + Design, who has designed a number of recently constructed fire halls in British Columbia. Dalmatian's vision for the site, which includes lots on Johnson, Cook and Yates Streets, is a master-planned, mixed-use development.

To provide financial certainty and minimize project risk, a third-party review was conducted by Johnston Davidson Architecture, the firm that completed the initial needs analysis for construction of a new facility. The review looked at functional flow of the layout, systems, specifications and the operational performance of the proposed public safety building.

In addition, an independent Value for Money assessment was completed by PricewaterhouseCoopers comparing the negotiated deal with independent benchmark costing for post-disaster buildings, as well as the alternate option to build on the City’s existing site. The costing comparison indicates this deal is fair and shows greater value for money and overall lower cost than the alternate option.

The current headquarters can remain at 1234 Yates Street while the new facility is constructed, saving time, money and, importantly, operational efficiency compared to identifying and setting up a suitable alternate temporary space if the City had chosen to build on site.

The agreement is subject to Dalmatian Developments bringing their overall project through the rezoning process, which includes the construction of the new public safety building.

The developer plans to submit a rezoning application to the City within the next six months. It is anticipated that if the land use process results in appropriate zoning of the property and the developer secures the necessary building permits, construction will take approximately 28 months.

Quotes:
Victoria Mayor Lisa Helps:
“We’ve taken an innovative approach to this project. We canvassed the private sector and said, ‘We need a fire hall, what are your ideas?’ What has come back is a fantastic project with a high-quality local developer that will see a fire hall built as part of a mixed use project that will be much more cost effective to the city than a stand-alone project, or rebuilding on the current site.”

Victoria Fire Chief Paul Bruce:
“This is an inspiring development that will meet our needs today and well into the future, as we continue to pursue local and regional efficiencies in our effort to provide the public with the highest level of emergency services.  The inclusion of an Emergency Operations Centre capable of managing hazard response specific to the City of Victoria is a practical and effective improvement to the management of emergencies on a holistic level.”

David Jawl, Director of Development, Dalmatian Developments:
“We look forward to working with the neighbourhood and the City to deliver a development that we can all be proud of for many years to come.”

Lance Stephenson, BC Emergency Health Services, Patient Care Director for Vancouver Island:
“In terms of location, this is absolutely ideal. The new centre is in the perfect location for us to get to patients in the downtown core. It’s great to be partnering in this new state-of-the-art centre and an incredible opportunity for our paramedics.”

The current headquarters building, built in 1958 and known as Fire Station No. 1, is home to a fuel station and 14 apparatus, as well as the Department’s administration, maintenance, emergency communications and dispatch, fire prevention, investigation and community education divisions, and the Victoria Emergency Management Agency. The current location of Fire Station No. 1, in combination with Fire Stations 2 (650 Michigan Street) and 3 (740 Bay Street), serve the Fire Department well in providing City-wide fire protection coverage.

Over the years, the Department’s operations have changed and expanded, and have outgrown the current space. Vehicle bays require alterations to allow for the size of the most recently purchased apparatus, and emergency power is insufficient. In addition, the building is not constructed to post-disaster seismic standards, potentially impacting the ability for fire trucks to respond in the event of a major earthquake.

Here's what the Victoria Fire Department headquarters looked like at its official opening on April 17, 1959.