Welcome Home!  Canadian Sport Centre Pacific, the Pacific Institute for Sport Excellence, the City of Victoria, and the District of Saanich invite you to officially welcome home Greater Victoria's London 2012 Olympic and Paralympic athletes and coaches on Wednesday, September 26, 2012 from 12:30 p.m. - 2 p.m. at Centennial Square.

Try out different sports activities, get autographs from the athletes and coaches, enjoy live music, and be part of an official welcome home ceremony! The official ceremony is at 1 p.m.

Athletes and coaches attending will include:

We hope you can join us at this free celebratory event! 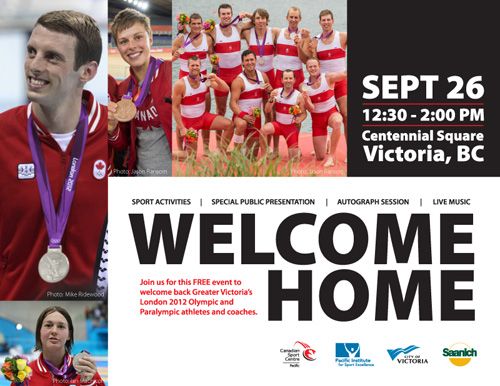