Schedule of Events and Map 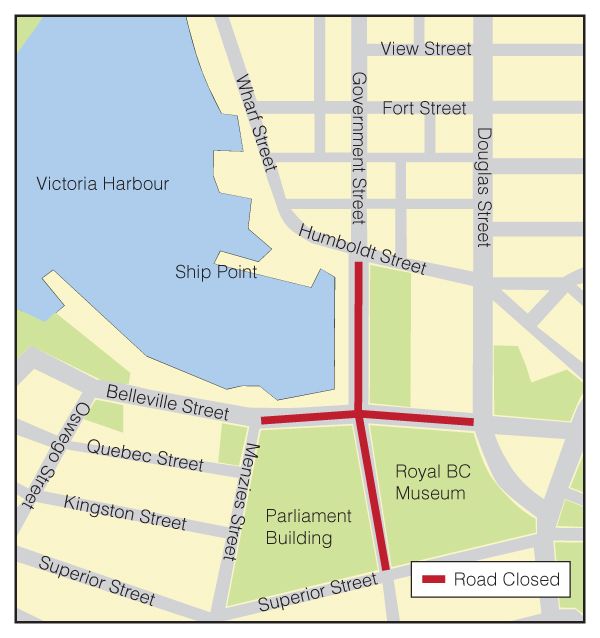 The Canada Day Kid's Zone will return with plenty of interactive activities for the whole family on the Legislature Lawns. Three-time JUNO nominated band, The Kerplunks will take centre stage Monday afternoon and promise a high-energy performance that will get kids moving and shaking.
The City of Victoria is pleased to welcome back Coast Capital Savings as the Presenting Sponsor of Victoria Celebrates Canada Day. The ever-expanding youth programming has been made possible by the generous support of the credit union over the past five years.

Main Stage highlights on July 1 will transform the Legislature Lawns into a one-of-a-kind concert. Headlining this year will be one of Canada's best up-and-coming acts, BC-based trio Hey Ocean!, a band with an extraordinary talent for blending various musical styles into a brand of infectious pop that is uniquely their own.

Victoria's Acres of Lions with their popular pop-rock anthems and Canadian power-pop legends Odds will also take the stage after a 10-year hiatus. Indie singer Kathryn Calder will bring her beautifully unique voice to the stage.

Montreal-based songstress Caracol will also perform at Victoria Celebrates Canada Day. Caracol has been nominated for a Juno and Folk Music Awards and has recently been nominated for a Genie Award for her work in the blockbuster Quebec film “Starbuck”. As part of an ongoing commitment by the City of Victoria to bring bilingual artists to the celebrations, the City acknowledges the financial support of the Province of British Columbia through the Canada-British Columbia Cooperation Agreement on Official Languages and Quebec-British Columbia Agreement for Cooperation and Exchange.

Also featured on the Main Stage will be a variety of Victoria artists and multicultural performers including the Le-La-La Dancers, Ocean Rain Chinese Academy, The O'Brien's and Stephanie Greaves.

A Flavour of Canada and The Zone Stage at Ship Point

A Flavour of Canada will return with a two-day international food village, sponsors' activity tents and expanded family-oriented performances on The Zone Stage at Ship Point.

Join us for spectacular fireworks on Canada Day at 10:20 p.m. over Victoria's Inner Harbour! Fireworks music will be broacast on The Zone @ 91-3 and 100.3 The Q.

On Canada Day, Coca-cola will donate the profits from the sale of its beverages at its stand located on Belleville Street in front of the Legislature Lawn to Mustard Seed.

Victoria Celebrates Canada Day will continue its “green” initiatives launched last year, including biodegradable vendors' food containers, increased recycling opportunities on site, and paper mache fireworks. Also returning will be the bike valet service, offering a safe place to lock up bicycles for those who want to take sustainable transportation to the event.

Victoria Celebrates Canada Day would not be possible without the support from event sponsors and community partners, including Presenting Sponsor Coast Capital Savings.