The vision for the City’s cultural development is :

“Victoria radiates creativity and thrives as a home to creative people and everyday artistic encounters.”

What do art and culture organizations, artists and creative entrepreneurs need to be successful? And how can the City support this vision and needs?

Staff presented to Council on September 22, 2022 with a five year progress report on Create Victoria Arts and Culture Master Plan and a request to extend Create Victoria to 2027.  Council endorsed the report and the extension of Create Victoria for another five years. Check out the Create Victoria Progress Report to see action items implemented to date.

Extensive public input has informed the development of the Create Victoria Arts and Culture Master Plan, which aligns ideas, people, and resources around a shared vision and a set of goals, strategies and actions to realize Victoria’s creative potential and guide investment over the next five years. City Council adopted the plan and its implementation framework on December 14, 2017.

We look forward to working with the community on implementing the plan!

The City's Create Victoria Arts and Culture Master Plan has won the 2018 Award of Excellence - Cultural Planning Award from the Creative City Network of Canada! Special thanks to all who provided input on the development of the Plan!

The Awards of Excellence Program recognizes and celebrates the outstanding achievements of Canadian municipalities, and its voting members, and encourages excellence in the development and delivery of cultural policy, planning and practice. Nominations are received from across Canada, and are reviewed by peer review jury of cultural professionals.

The Award of Excellence - Cultural Planning Award recognizes a Canadian municipality that has developed, adopted, and implemented an excellent Culture Plan with a process that demonstrates outstanding visionary leadership and best practices in cultural planning or a Canadian municipality that has reviewed, revitalized and implemented a previously adopted Cultural Plan. Learn more.

Thank you to everyone who has helped shape the Create Victoria plan and provided feedback. The community had an opportunity to view the draft plan and provide feedback in person at a range of events by email at culture@victoria.ca or by completing an online survey from June 19 to September 30, 2017.

Based on the community's and Council's feedback, the draft plan was revised and an implementation framework was developed for Council's consideration, both of which were approved on December 14, 2017.

The following video conveys a glimpse of Victoria's vibrant arts and culture scene.

From June 19 - September 30, 2017, the community was invited to provide feedback on the Draft Create Victoria Arts and Culture Master Plan [PDF - 9.9 MB]

What's In It for Me? Fact Sheet Series
The draft plan recognizes and respond to the needs of local artists, creative practitioners, arts and culture facilities and organizations, as well as residents and local businesses. All are inter-connected, and in turn, support the health and vitality of a vibrant creative city.

Learn how the draft plan may benefit you in the "What's In It for Me?" fact sheet series:

From September 2016 to mid-April 2017, we engaged with close to 2,000 people on the Create Victoria initiative at a series of Cultural Cafes, workshops and at community events. We've also heard from more than 700 people who participated in our online survey in early spring to help shape the draft plan and measure Victoria's arts and culture's impact on the local economy. Below are some helpful references to see how we got to the Create Victoria Draft Plan.

Are You on the Map? 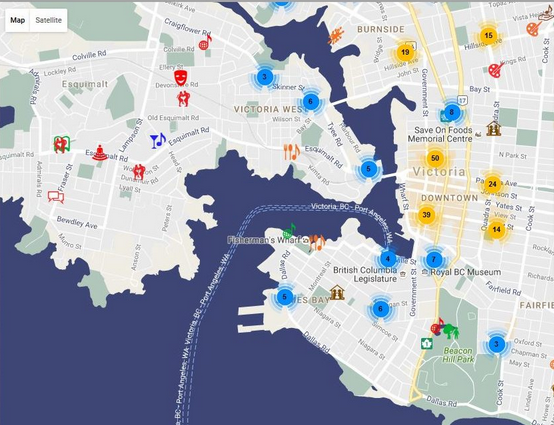 The Arts Victoria inventory maps out more than 1,000 City-owned and community-run arts and culture assets in Victoria.

You can add venues, organizations, businesses and public art to our culture map. Click here to add content.

The Arts and Culture Master Plan Advisory Group provided expertise and knowledge in arts, culture and heritage to help build community connections and encourage broad participation from the community.The Advisory Group's term has been extended to December 2018 to allow for their input during the first year of the plan's implementation. Learn more.